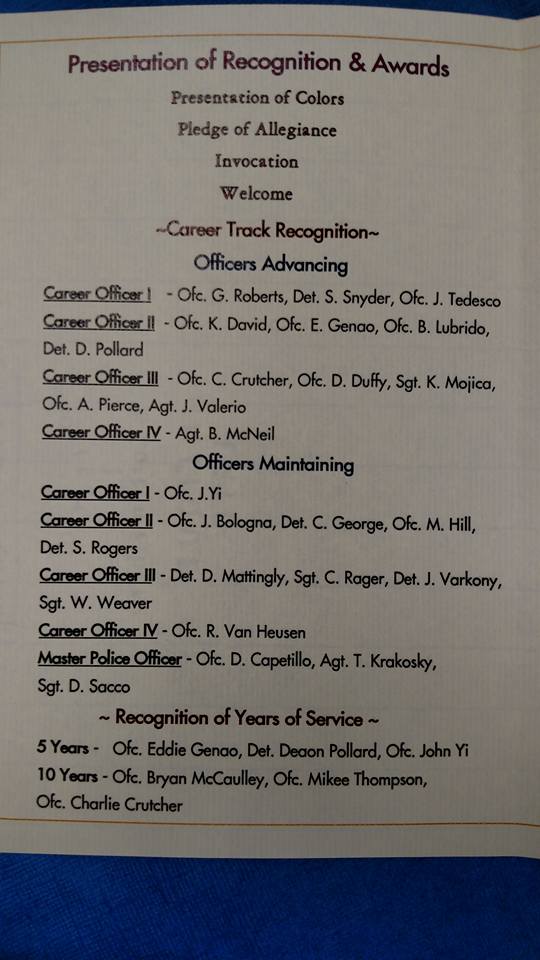 The Freedom From Religion Foundation is teaching a Florida police chief the U.S. Constitution.

In June, FFRF sent a letter to Oviedo Chief of Police Jeffrey Chudnow regarding an Oviedo Police Department Awards Ceremony and Career Track Recognition held in March at the Reformed Theological Seminary, a church and religious school. The program included a religious invocation.

"It is a fundamental principle of Establishment Clause jurisprudence that that the government cannot promote, advance or otherwise endorse religion," FFRF Staff Attorney Andrew Seidel wrote to Chudnow. "Allowing prayer at an awards ceremony sends the message that the police department not only prefers religion over nonreligion, but also Christianity over other faiths."

Chudnow replied last month, asserting that the Oviedo Police Department had no "intention of establishing any religion." Anyway, he said, as a man practicing the Jewish faith, he wasn't "offended" by the invocation and didn't receive any complaints.

FFRF quickly responded. In a follow-up letter, FFRF contended the fact that OPD did not "have any intention of establishing of any religion" is irrelevant. The inclusion of an invocation at an official OPD ceremony gives the impression that the OPD—and, hence the government—endorses religion. Supreme Court Justice Blackmun stated, "It is not enough that the government restrain from compelling religious practices, it must not engage in them either..."

Seidel also addressed the chief's second point: "Those offended by the invocation, marginalized by the display of state-sanctioned religion at a secular awards ceremony, would not seek redress from OPD and risk making themselves targets for ridicule or persecution. Also, we complained."

Chudnow seems to have missed the point. In a second response dated July 18, he claimed that the interpretation of the First Amendment by the courts was highly fluid and unsettled. Besides, he stated, he had seen a copy of the Ten Commandments hanging in the chambers of the U.S. Supreme Court during a 2009 visit.

FFRF has attempted to lay his misconceptions to rest in a letter sent out this week.

It agreed with Chudnow that the First Amendment protects the right of private citizens to freely exercise religion, but informed him this protection does not extend to a government agency or to a person acting in his or her official capacity.

And, FFRF said, his contention about First Amendment law is highly dubious.

"Your statement that the religion clauses of the First Amendment are 'fluid and dynamic' is problematic," Seidel writes to Chudnow. "Regardless of the composition of the Supreme Court, the justices have referred time and again to the words of Thomas Jefferson in interpreting the Establishment Clause and will likely continue to do so well into the future. Jefferson's 'wall of separation between church and state' has been repeatedly noted as the central organizing principle presented by the Establishment Clause."

FFRF is glad to be of help to public servants and correct their basic misunderstanding about the freedom of religion, a misconception Chudenow shares with others: "As a private citizen, the Free Exercise Clause protects you. But, when acting as chief of police of Oviedo Police Department, you are the government. And the First Amendment prohibits government from impinging on citizens' rights; it does not give the government any rights."

"We are delighted that we have contributed to the edification of a police chief," says FFRF Co-President Annie Laurie Gaylor. "We hope that this education will get him to acknowledge that he has been constitutionally wrong."

Now that Chudnow is well informed about the First Amendment, FFRF asks that he discontinue the practice of opening Oviedo Police Department ceremonies with invocations and holding official events at facilities that are religious in nature.

The Freedom From Religion Foundation has a national enrollment of almost 24,000 nonreligious members, including more than 1,000 individuals and a chapter in Florida.