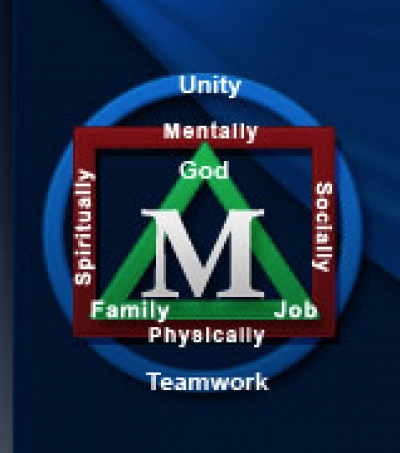 The Freedom From Religion Foundation is protesting a blatantly religious school district logo in North Carolina.

The logo of Madison County Schools (headquartered in Marshall) contains a triangle with the word "God" at the top and a surrounding square that includes "spiritually" as one of four traits. Former Superintendent Ronald Wilcox designed the logo more than a decade ago and told the Asheville Citizen-Times in 2014, "It just sums up the culture here and what we believe." The logo is widely used throughout the district and is prominently featured on the official website. FFRF had earlier written to the school district two years ago about the logo but did not receive a reply.

"It is well settled by the courts that public schools may not advance or promote religion," FFRF Staff Attorney Patrick Elliott writes to Madison County Schools Board of Education Chair Theresa Banks. "Furthermore, courts have continually held that school districts may not display religious messages in schools. Displaying this inherently religious logo violates the Establishment Clause because it demonstrates district preference for religion over nonreligion."

It is no defense that religion is one element on the logo, FFRF asserts, citing past court rulings on the issue. It warns Madison County Schools that continuing use of the logo poses a serious liability problem for the school system, since earlier this year FFRF won a judgment against the Chino Valley Unified School Board in California in a challenge to its unconstitutional religious practices that resulted in an award of more than $200,000 in costs and attorney fees.

"The Madison County Schools district should realize how egregious this constitutional violation is," says FFRF Co-President Annie Laurie Gaylor. "We hope that school officials will resolve this so that we won't have to take further action."

FFRF is encouraging parents or students who object to the religious logo to contact it at 1-800-335-4021 or at This email address is being protected from spambots. You need JavaScript enabled to view it..

FFRF again requests the Madison County Schools district to remove "God" and "spirituality" from the logo. It is time to redesign the logo, it advises the school system.

The Freedom From Religion Foundation is a nationwide nonprofit organization dedicated to the separation of state and church, with 24,000 nonreligious members across the country, including more than 500 in North Carolina.