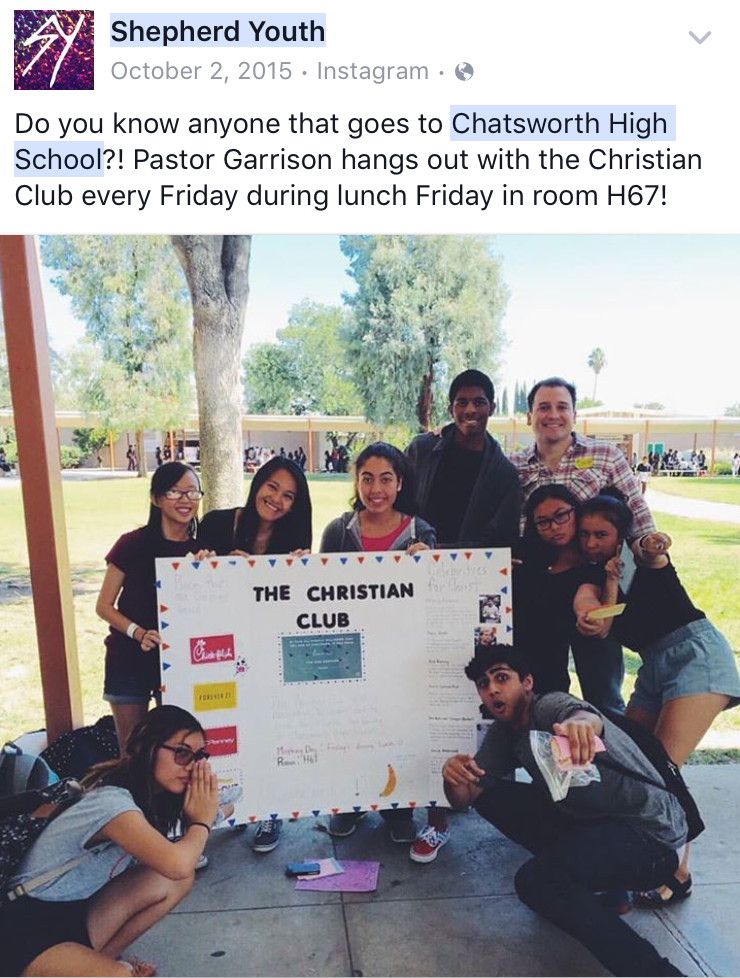 The Freedom From Religion Foundation wants a number of illegal Los Angeles public school religious clubs to be investigated.

Last September, FFRF had drawn the Los Angeles Unified School District's attention to an unconstitutional bible club (the TRUTH Club), run by football coach Jesse Montes, at Sun Valley High School. The club is still operating with Montes' involvement, according to the school's website. FFRF received no response to its original letter.

Now, FFRF has learned that there is a Christian Club convening every Friday at Chatsworth Charter High School. It is organized by Garrison Polsgrove, youth pastor at the Shepherd Church. (See image.) Polsgrove reportedly brings in free food to incentivize attendance, leads students in prayer, reads from the bible and delivers sermons. He has also been permitted to attend the school's open house to represent the Christian Club to community members and parents. Teachers have also participated in the meetings and promoted the club to students. FFRF Legal Fellow Madeline Ziegler contacted the school district in mid-May.

"School employees may not run or even participate in religious clubs in public schools, nor can they promote religious clubs or invite students to attend," FFRF Staff Attorney Andrew Seidel wrote to LA Unified School District Counsel David Holmquist in September. "Staff participation in religious activities at school leads any reasonable student to see the club's religious message as sponsored by the school."

FFRF asks that the school district investigate both the Christian Club and the TRUTH Club. If the allegations are confirmed, the two clubs should be disbanded and the teachers involved appropriately disciplined.

The Freedom From Religion Foundation is dedicated to the separation of state and church, with 23,700 members nationwide, including more than 3,000 in California.