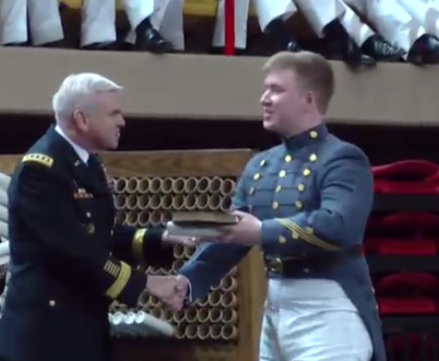 The Freedom From Religion Foundation is dismayed at the unconstitutional distribution of religious texts during the commencement at a famed public military institution.

At this year's ceremony on May 16, retired Gen. J. H. Binford Peay III, superintendent of the Virginia Military Institute, handed out bibles and other holy books to the graduating cadets. (See image.) The institute has been reportedly doing this since its founding and is intimately involved in providing the religious texts to cadets. In recent years, the institute has collected order forms for the cadets' preferred holy book to distribute as part of the ceremony. FFRF requests that this practice be ended.

"As a public institution, Virginia Military Institute's actions must conform with the Establishment Clause of the First Amendment," FFRF Staff Attorney Patrick Elliott writes to Peay. "The courts have well settled that public schools may not endorse or advance religion."

There are several problems with the institute dispersing bibles and other religious texts on stage, FFRF contends. Such a custom coerces cadets to accept these books. It also lacks a secular purpose. And it constitutes an advancement and endorsement of religion, as well as an unconstitutional entanglement with it. The defense that this is a long-standing tradition is no excuse, since Virginia Military Institute has had several unsavory traditions it has had to discontinue, such as not admitting women till the U.S. Supreme Court forced it to do so in the mid-1990s and not allowing in black cadets until the federal government compelled it.

Will the institute provide copies of Richard Dawkins' "The God Delusion" to atheist students at the commencement if they request it, FFRF asks? And how exactly is it decided which version and translation of the bible to hand out? The way to avoid such vexing questions is to leave religion to individual cadets.

FFRF is extremely disappointed that holy texts were again distributed at the commencement yesterday and would like this to be the last year that this unconstitutional "tradition" occurs at the secular institute.

The Freedom From Religion Foundation is dedicated to the separation of state and church, with 23,700 members nationwide, including more than 500 in Virginia.