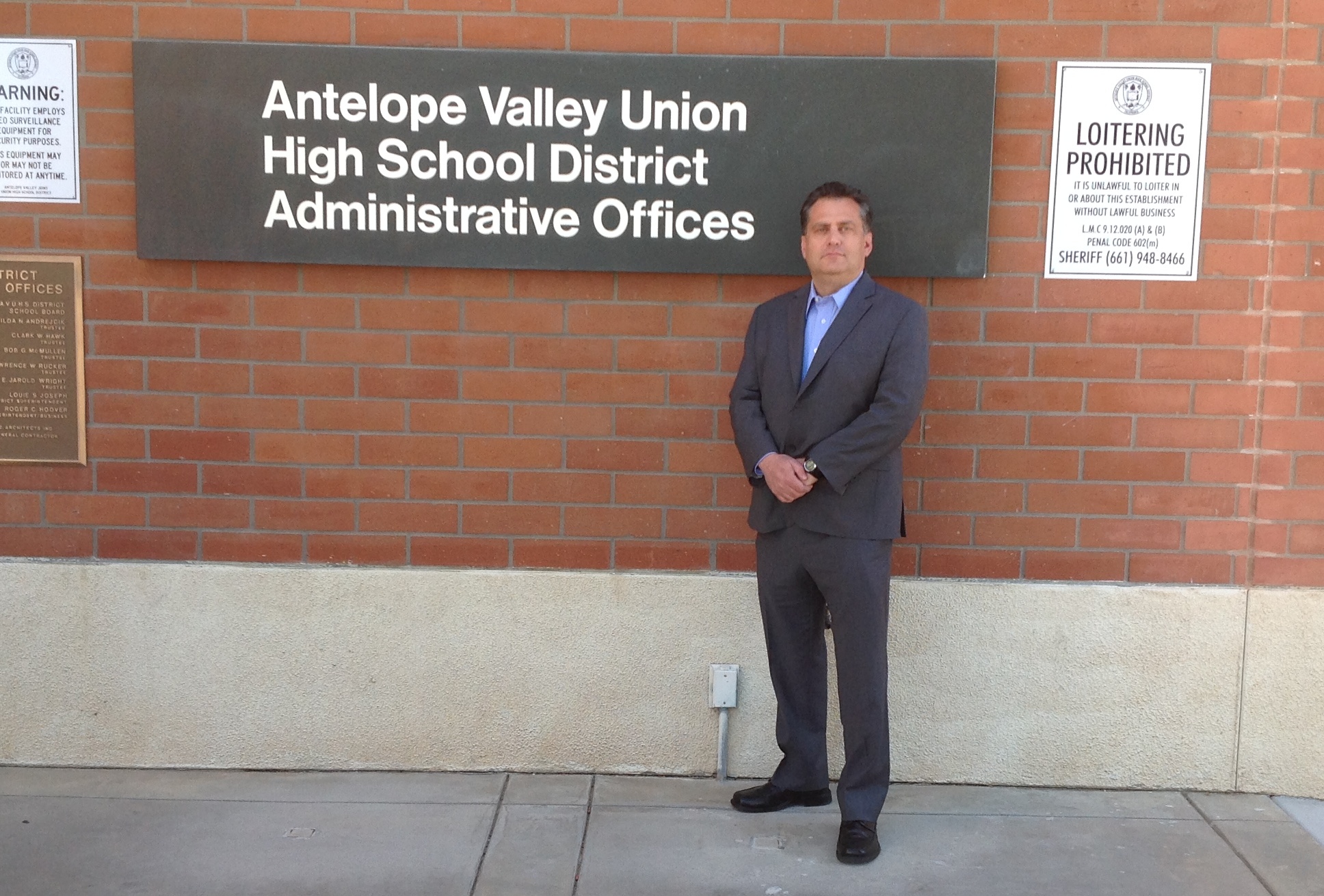 Plaintiff David Dionne stands in front of the offices of the Antelope Valley Union High School District, which censored scholarships from Dionne's group and FFRF.
The Freedom From Religion Foundation, with the Antelope Valley Freethinkers, are suing a California school district for censoring information about the groups' scholarship opportunities.

The lawsuit was filed today in California federal court. FFRF, the Antelope Valley Freethinkers, and AVF President David Dionne are plaintiffs. The defendants are the Antelope Valley Union High School District and members of the district board of trustees.

The Antelope Valley Union High School District distributes lists of scholarship opportunities to district students, but for the past two years the district has refused to publish scholarship opportunities offered by FFRF and the Antelope Valley Freethinkers. The Freethinkers' scholarship asked college-bound seniors to write essays on the topic, "Being a young freethinker in Antelope Valley," with a total award money of $1,750. FFRF's rejected essay competition for college-bound high school seniors (with more than $7,500 in cash prizes) offered students a chance to write on the topic of "Young, bold and nonbelieving: Challenges of being a nonbeliever of color" or "Why I'm Good Without God: Challenges of being a young nonbeliever."

The district said it was rejecting the scholarships because the essay announcements would upset parents, claiming that they that they appeared to "promote anti-religious expression" and had "aggressive" and "argumentative undertones towards religion." Offers to modify the wording were rejected.

In 2014, FFRF sent the district two letters objecting to the district's censorship. In her response at the end of the year, the district's general counsel, Bridget L. Cook, stated that "since the district is a limited public forum, we reserve the right to determine what information we allow to be disseminated in our schools." Repeated FFRF follow-ups were to no avail.

The Antelope Valley Union High School District is being inconsistent in its policy. The district's scholarship lists included scholarships that solicit religious expression or contain religious elements. In just one example, The Quartz Hill High School Scholarship Bulletin for December-January 2015-2016 lists the "Playing with Purpose Award," which requires the applicant to write "at least one paragraph . . . describing how and when you accepted Jesus Christ as your personal Lord and Savior and what your present relationship with Him means to you."

This unequal treatment amounts to viewpoint discrimination because a public school that publishes scholarship opportunities for students offered by religious groups many not refuse to publish scholarships offered by two atheist organizations, FFRF contends. FFRF is the largest association of freethinkers (atheists and agnostics) in the United States with 23,700 members, including more than 3,000 in California. FFRF seeks a permanent injunction enjoining the defendants from engaging in continued viewpoint discrimination in publishing scholarship opportunities.

The case is being litigated by California attorney David J.P. Kaloyanides, with FFRF Staff Attorney Andrew Seidel and FFRF Legal Fellow Madeline Ziegler serving as co-counsel. The case, No. 2:16-cv-02487, was filed in the U.S. District Court, Central District of California, Western Division.