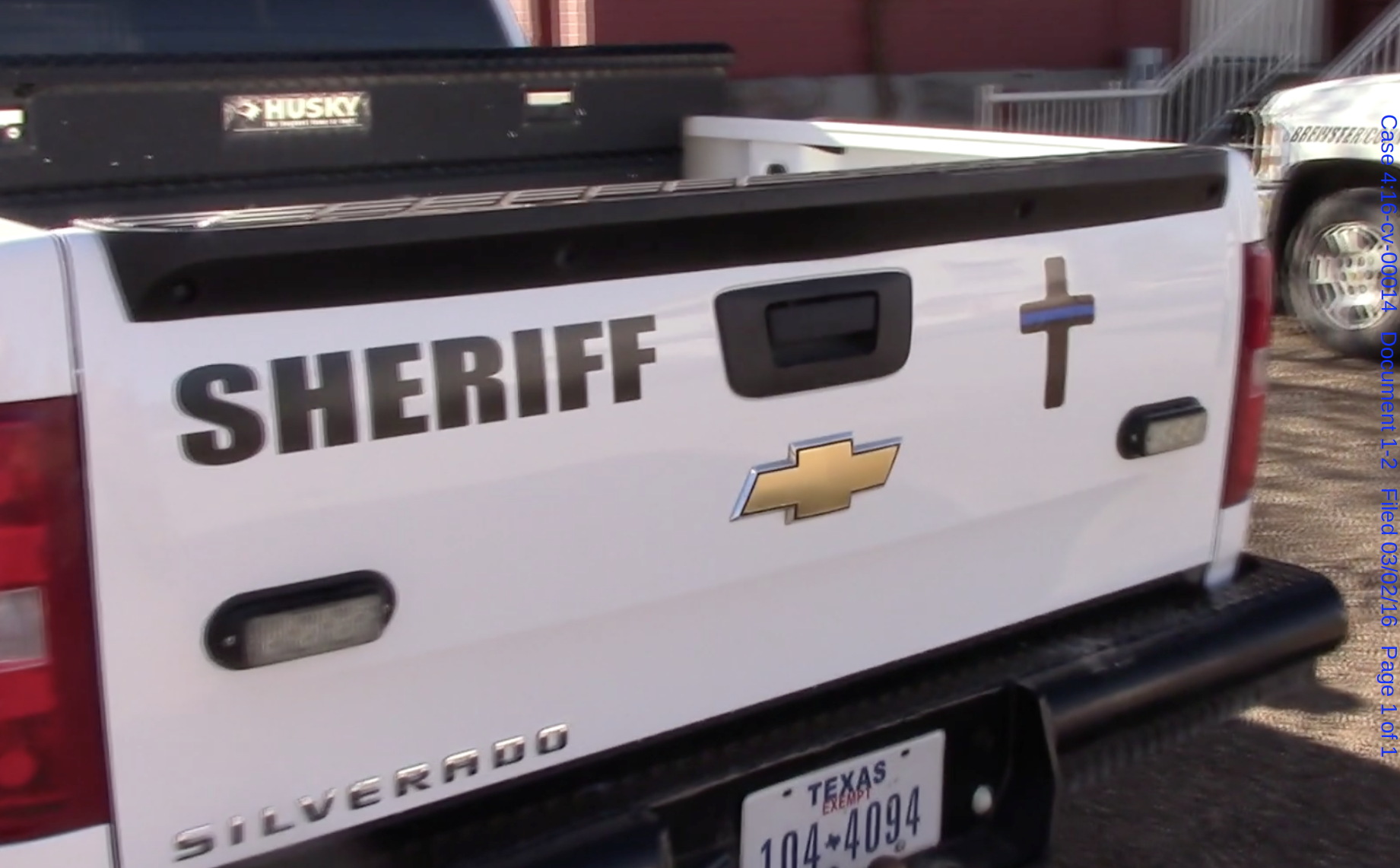 The Freedom From Religion Foundation and two of its members sued today a Texas sheriff over his decision to affix Latin cross decals on county patrol vehicles.

Brewster County Sheriff Ronny Dodson announced in December that he "wanted God's protection over his deputies" in deciding to place the prominent crosses on at least five county law enforcement vehicles.

The federal lawsuit against Dodson was filed in U.S. District Court, Western District of Texas, Alpine Division, on March 2.

Local plaintiffs Kevin Price and Jesse Castillo, both atheists and members of the state/church watchdog organization, have come in regular contact with the Christian displays numerous times while out driving in the county. They do "not believe in any supernatural beings" and object to "an exclusively Christian religious symbol" being displayed on their county's patrol vehicles, the suit notes.

Both men contend "the Latin crosses convey the divisive message that non-Christians . . . are not equally valued members of the community and that Christians are favored."

When the Brewster County Sheriff's Office Facebook page posted two comments supportive of the Latin crosses, Price criticized the action. His comments were deleted by the sheriff's office and he was blocked from making further comments.

Castillo "believes that the crosses heighten the stigma associated with being an atheist and that he might receive more favorable treatment from the Sheriff's Office by hiding his atheism or by displaying pro-Christian messages," states FFRF's legal complaint.

It adds, "The Latin crosses represent an endorsement of religion, in this case Christianity, and have the principal effect of advancing religion. Their display by the government, therefore, runs afoul of the Establishment Clause of the First Amendment to the United States Constitution and Article I, Section 6 of the Texas Constitution."

The nonprofit group, with 23,500 members nationwide and almost 1,000 in Texas, seeks appropriate declaratory and injunctive relief, as well as nominal damages and attorney's fees.

FFRF Co-President Annie Laurie Gaylor asserts that no government official has the right to promote his or her personal beliefs on government property.

"Whether it is a cross, a star and crescent, or a pentagram, law enforcement must remain neutral on matters of religion in order to foster public confidence in their impartiality," Gaylor says.

Brewster County is located in the western part of the state, with a population of less than 10,000. Its county seat and only city is Alpine. According to the Texas Observer, the county is the largest in the state—"five times the size of Rhode Island, three times the size of Delaware and 500 square miles larger than Connecticut. It also has the largest stretch of the U.S.-Mexico border of any Texas county."

This is FFRF's second federal lawsuit filed in Texas in as many weeks. Last week, FFRF sued Texas Gov. Greg Abbott for ordering the removal of its Bill of Rights display from the Texas state Capitol, and for violating FFRF's free speech, equal protection and due process rights.

The case is brought on behalf of the plaintiffs by Randall L. Kallinen, of Houston, with FFRF Staff Attorneys Sam Grover and Patrick Elliott as co-counsel. Kallinen represented the late Kay Staley in her victorious litigation to remove a bible monument from the steps of the Harris County Courthouse.