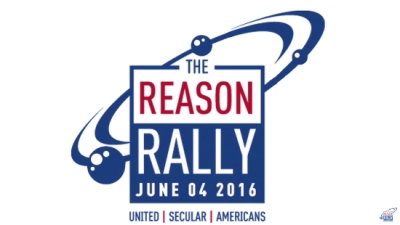 Tens of thousands of people will gather at the Lincoln Memorial June 4, 2016, to show the world that reason, science, and freedom of belief are vital to Americans. Reason Rally 2016 is a celebration of fact-driven public policy, the value of critical thinking, and the voting power of secular Americans. The Freedom From Religion Foundation is co-sponsoring this event (view additional sponsors below).

"The goal of Reason Rally 2016 is to show the presence and power of the nonreligious voting bloc, and to put reason back at the forefront of our public and political discourse," said Lyz Liddell, executive director of Reason Rally 2016. "We want to excite and empower attendees about that message so they take it back home and apply it at the local and state levels."

Participants will be joined by top-level scientists, entertainers, activists, and atheists who share their concern about the lack of critical thinking in public policy — NASA planetary expert Carolyn Porco, comedian and activist Margaret Cho, renowned evolutionary biologist Richard Dawkins, and many more.

"If you told me there would be a major national event, where the largest number of nonreligious people ever to assemble will gather, and proclaim that they are concerned about the bold incursions of religious belief into the governance and future of our country and the principles on which it's built, then I would surely make a point of being there," said Porco, who is well known for her work on NASA's Cassini Project to Saturn. "So, am I going to the Reason Rally in DC on June 4? You bet I am!"

Non-believers are on the rise, and facts — not faith — are becoming more important to voters. A 2015 Gallup Poll found that among those between the ages of 18 and 24, 31% claim no religious affiliation. In the 45-49 age group, 16% are unaffiliated. A Pew study found that almost half of American adults do not care if a presidential candidate is an atheist.

Reason Rally 2016 will showcase the presence and power of the nonreligious voting bloc, and the desire of this significant bloc of voters to put reason at the forefront of our public and political discourse.

"The religious have too much power in this country, and they're vastly over-represented in Congress," says Julia Sweeney, SNL alumna and a speaker at the Rally. "So, let's stop the magical thinking. Let's have a rally that shows the force of those who embrace Reason and Science over Divine Guidance. We're here — we don't have fear — and we want to be counted for what we are: a real political and social force! Also, we like to have fun."

Attendees will have the opportunity for fun. A pre-party and after-parties, a Sunday mini-conference, and several VIP events will be held during the four-day event.

It will be a Voting Bloc Party that captures the feeling of community and celebrates the increased power of non-religious voters. Two days of lobbying, on June 2 -3, will precede the gathering at the Lincoln Memorial and put that power into action. Visits to all 535 congressional offices are planned.

Everyone who supports good sense in government is welcome, for one day or the whole celebration. Visit the website, http://www.reasonrally.org for more details, to volunteer before or during the event, join the lobbying effort, or sign up for the conference and other special events.

Highly respected scientists, civil rights activists, musicians, comedians, and bloggers, devoted to the cause of science-based public policy, will be on hand to provide intellectual stimulation and entertainment. More will be joining in the coming days.

Also lending their support to Reason Rally 2016 as Minor Sponsors are: