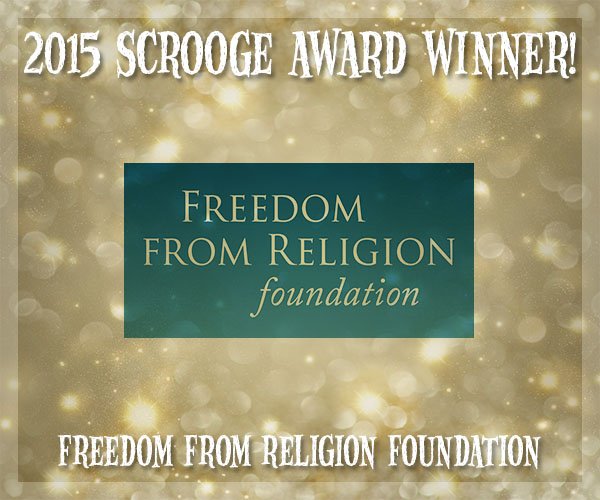 The Freedom From Religion Foundation has been named the winner of the 2015 "Scrooge Award" by the arch-conservative Liberty Institute, for FFRF's "particularly ravenous agenda to strip religious liberty from their fellow Americans."

FFRF's "ravenous agenda," of course, is enforcing the Establishment Clause of the First Amendment to the Constitution. A state/church watchdog, FFRF has more than 23,000 freethinking (atheist/agnostic) members in North America.

According to the Liberty Institute, FFRF won the award for "launching a national assault in 2015 on law enforcement officers and the national motto. FFRF sent more than 60 letters to various police departments and sheriffs' offices — demanding that the officers remove the national motto, 'In God We Trust,' from their vehicles."

Liberty Institute asked voters to help determine the victor, telling readers that "2015 saw more hostility to religious freedom than any year in our nation's history. But among the flood of legal attacks, some antagonists deserve special recognition for their particularly ravenous agenda to strip religious liberty from their fellow Americans."

"FFRF is delighted to be named an 'antagonist deserving special recognition' from Liberty Institute," says Dan Barker, a former evangelical minister who is now FFRF co-president. "It means we must be doing something right!"

FFRF is also proud to be associated with the other Scrooge nominees, which include:

Bremerton School District of Bremerton, Wash., for suspending high school football coach Joe Kennedy for praying with players after games. FFRF was also involved in this runner-up issue, sending a letter in support of the school district in October.

Mikey Weinstein from Military Religious Freedom Foundation, for complaining to the U.S. Air Force Academy about the football players praying in public before games.

The U.S. Department of Health & Human Services, for requiring religious non-profit organizations to abide by the Affordable Care Act birth control mandate like every other employer, or, as Liberty Institute spins it, "attempting to force religious, non-profit organizations to provide insurance coverage for abortion-inducing drugs to their employees, with utter disregard to the ministries' rights of conscience."

In 2014 FFRF was named one of the seven nominees for the "honor." The 2014 Scrooge winner was the Military Religious Freedom Foundation.