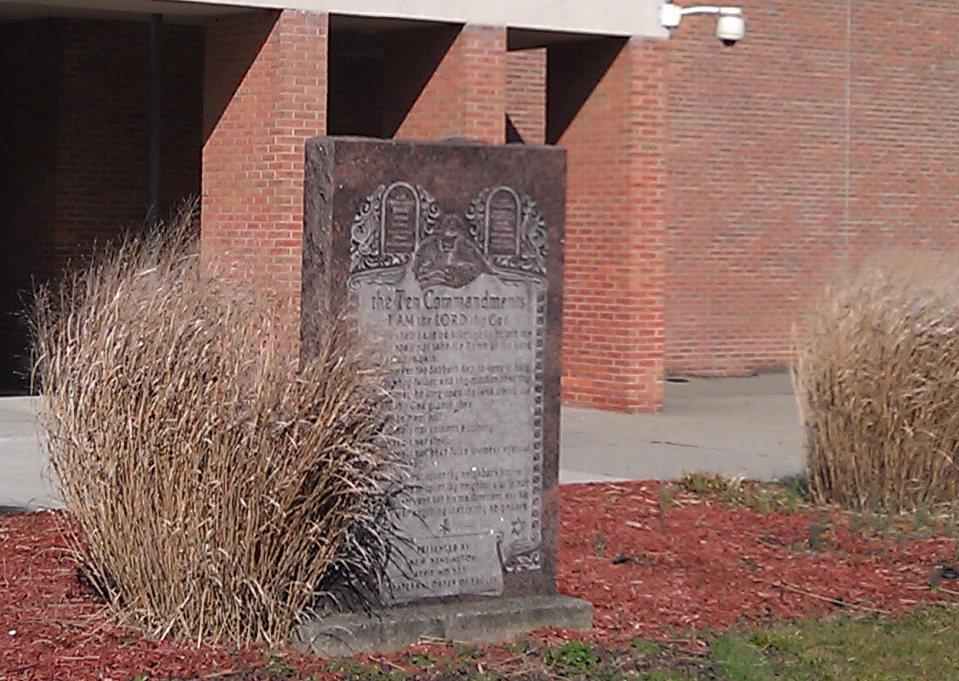 The Freedom From Religion Foundation has appealed its case over a Ten Commandments monument in Pennsylvania's New Kensington-Arnold School District. The Third Circuit Court of Appeals will likely rule on the matter next year.

A federal judge previously ruled that FFRF's plaintiffs, Marie Schaub, who is a an atheist and FFRF member, and her anonymous child, did not have standing to challenge the monument, despite the fact that the plaintiffs had come into contact with the monument at Valley High School and Schaub refused to send her child to the school because of the monument.

In its brief, written by attorney Marcus Schneider, FFRF points out that the plaintiffs were forced either to have "contact with an unwelcome religious exercise" or assume the burden of avoiding such contact. The student has different classmates, and cannot take a school bus from Schaub's house to her new school, which is five miles away.

"Every morning, high school students in the NKASD walk past the six-foot tall, granite Ten Commandments Monument. Its stone-carved letters proclaim to all: I AM the LORD thy God," FFRF's brief says. "To prevent Doe 1 from walking in the shadow of this imposing monolith, Marie Schaub initiated this case when Doe 1 was two years away from attending VHS. When August 2014 arrived and the case remained unresolved, Schaub and her family made the difficult decision to remove Doe 1 from her home school district to avoid the coercive effect that Appellants believe the Monument conveys."

Despite this, Judge Terrence McVerry of the Western District of Pennsylvania held that the plaintiffs lacked direct, frequent enough contact with the monument to bring suit.

"It's very important to rectify Judge McVerry's mistaken ruling," FFRF Co-President Annie Laurie Gaylor commented. "Marie Schaub and her child have endured direct injury due to this illegal endorsement of religion by their school district. Not only is the student compelled to attend another school, at inconvenience and disruption, to avoid the religious monument, but the family has been subjected to communitywide opprobrium. The district essentially has turned them into targets and outsiders in their own school district."

In a parallel case against the Connellsville Area School District, also in Pennsylvania, the same judge ruled that a Ten Commandments monument in front of a junior high school was unconstitutional. The district removed that monument in October.

FFRF is a national state/church watchdog with about 23,000 members, including more than 700 in Pennsylvania.