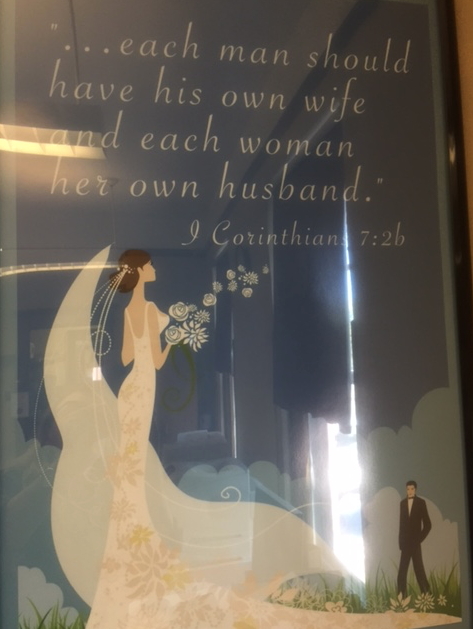 A Colorado county clerk has removed an overtly religious poster from the office where citizens, including same-sex couples, get their marriage licenses after the Freedom From Religion Foundation complained.

Two of FFRF's complainants have confirmed that the poster is down and was likely removed on Thursday, the day after FFRF Staff Attorney Andrew Seidel asked Elbert County Clerk Dallas Schroeder to put him in touch with his attorney.

"We're glad that the poster, which was meant to intimidate LGBT citizens and promote Schroeder's personal religion, has been removed from government property," Seidel said. "The government must remain neutral on matters of religion and quoting the bible is hardly neutral."

Schroeder had made it clear in emails that he is against same-sex marriage, and had a poster created by a local artist to put up in the office, so "there is no way to miss it if you are in for a marriage license," he wrote.

In an email exchange between several county clerks discussing how to handle same-sex marriage licenses, Schroeder wrote on Aug. 9: "It is a picture of a bride standing on a hill with the groom walking up the hill to meet her. On the bottom I have a portion of the verse in I Corinthians where Paul says, 'Each man should have his own wife, and each woman her own husband.' And cite the verse."

Initially, Schroeder believed he was following the letter of the law.

"I am not denying anyone service," he wrote. "My thought process is that they have to see the poster and if they choose to violate God's written Word, then that is on their head. I have warned them."

But after being sent several letters from Seidel and asking to speak with his lawyer, Schroeder apparently relented and removed the poster, at least from the sight of county constituents.

FFRF is a national nonprofit organization representing about 23,000 members across the country, including more than 650 members in Colorado with chapters in both Colorado Springs and Denver.