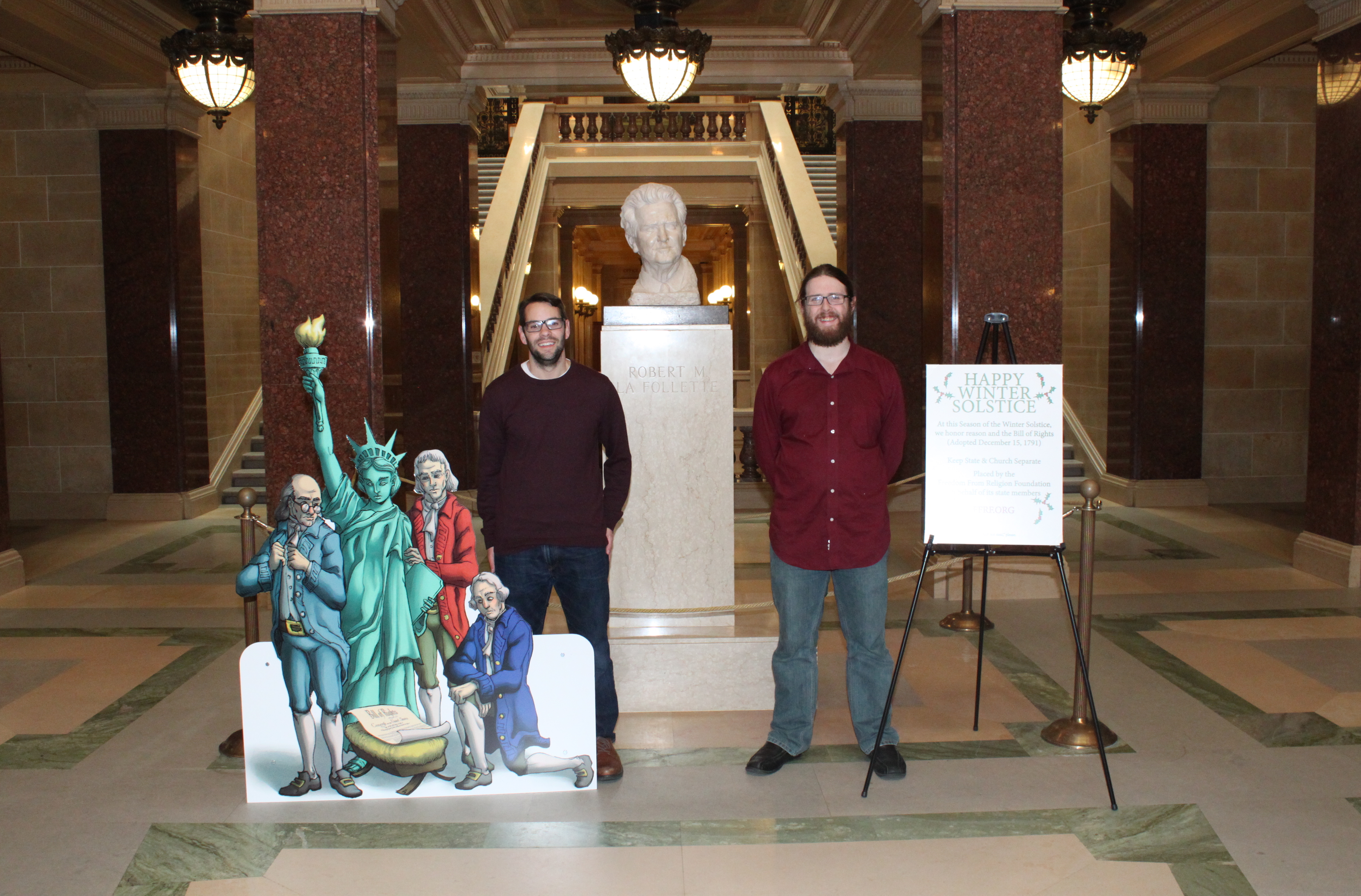 Today marks the 20th appearance of the Freedom From Religion Foundation's famous "no gods" Winter Solstice display in the Wisconsin State Capitol in Madison.

Joining the gilt display in the first floor rotunda this year is FFRF's newest Winter Solstice display, a whimsical metal cut-out depicting the "nativity" of the Bill of Rights, whose anniversary is Dec. 15.

The irreverent graphic, by artist Jacob Fortin, depicts founders Benjamin Franklin, Thomas Jefferson and John Adams, who's kneeling, all adoring a Bill of Rights in a manger.

"Happy Winter Solstice. At this Season of the Winter Solstice, we honor reason and the Bill of Rights (adopted Dec. 15, 1791)." At the bottom it reads: "Thou shalt not steal, please."

FFRF's traditional message, by FFRF's principal founder Anne Nicol Gaylor, who died at 88 earlier this year, was composed as an equal-time challenge, following religious divisiveness over religion at the seat of state government. 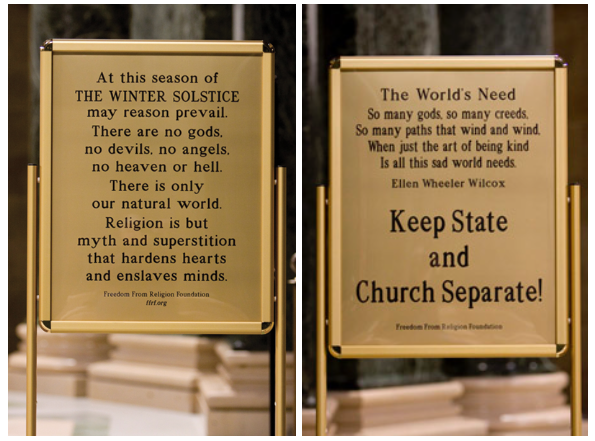 At this season of the Winter Solstice, may reason prevail.
There are no gods, no devils, no angels, no heaven or hell.
There is only our natural world.
Religion is but myth and superstition that hardens hearts and enslaves minds.

On the back is a four-line secular poem by celebrated Wisconsin poet Ella Wheeler Wilcox. ("So many gods, so many creeds/So many paths that wind and wind/While just the art of being kind/Is all this sad world needs.")

Both displays are permitted to be up through December.

"The winter solstice is the reason for the season," says FFRF Co-President Dan Barker. Occurring this year on Dec. 22, it marks the shortest, darkest day of the year, heralds the symbolic rebirth of the sun and has been celebrated for millennia in the Northern Hemisphere with festivals of light, evergreens, gift exchanges and seasonal gatherings.

"FFRF would vastly prefer that government buildings and seats of government be free from religion — and irreligion," Barker added. "The rotunda is getting very cluttered. But if a devotional nativity display is allowed, there must be 'room at the inn' for all points of view, including irreverency and freethought. In celebrating the solstice, we celebrate reality."

State/church watchdog FFRF, based in Madison, Wis., has about 23,000 members, including more than 1,300 in Wisconsin, and has long been the nation's largest association of freethinkers, atheists and agnostics.