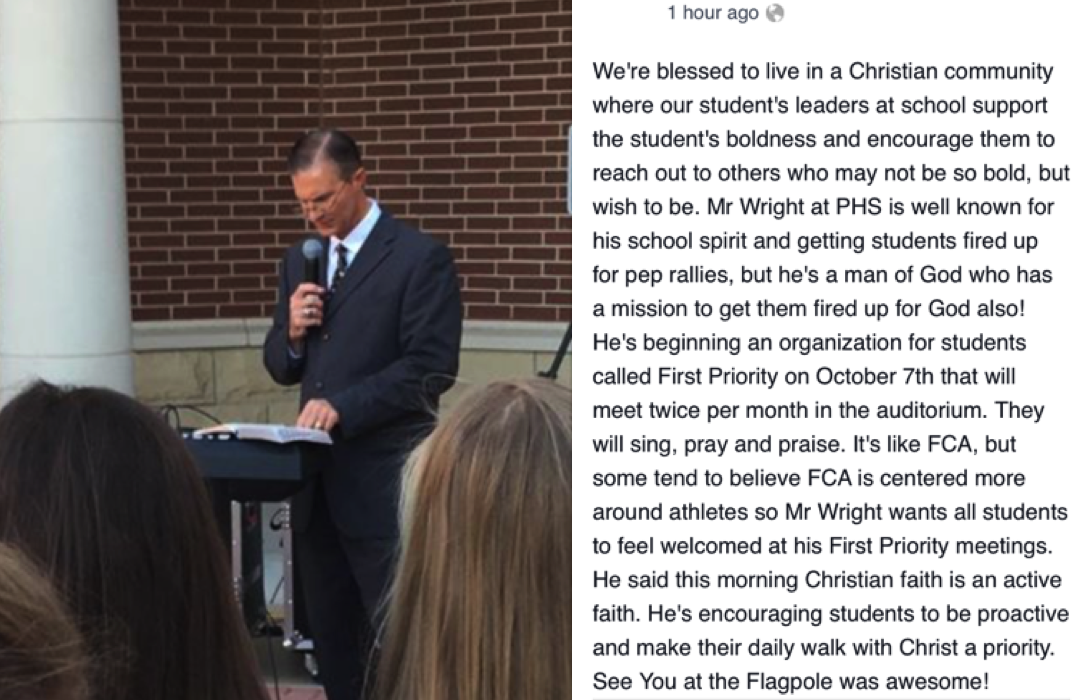 The Freedom From Religion Foundation sent a letter today to the Prosper Independent School District in Texas, strongly criticizing

FFRF received a report from a family in the district detailing how Prosper High School Principal Greg Wright preached to students at the school's See You at the Pole gathering on Sept. 25, an annual Christian prayer event.

Wright is also reportedly forming a religious club for students, the First Priority Club, and other teachers have been permitted to form religious clubs in the past. Wright is "encouraging students to be proactive and make their daily walk with Christ a priority," read a Facebook post promoting Wright's new club.

Seidel wrote that it's important that PISD staff understand that "as government officers and state actors, their personal rights of free exercise and free speech are not unlimited." Religious events and clubs must be "genuinely student-led" under the federal Equal Access Act, Seidel emphasized.

Even See You At The Pole's official website recognizes that "Adult volunteers and parents should not lead the See You at the Pole gathering," FFRF points out. "The best place for an adult to pray on the day of See You at the Pole is not on campus with the students," the site continues.

In addition, blatant admissions on social media make any claim that the new First Priority Club is student-led "disingenuous," said Seidel. "Student clubs must be student clubs, not excuses for adults to lead religious worship on school grounds." FFRF also objected to an assistant principal's display of a cross and a plaque about god in her office.

Seidel asked the district to be wary of potential bullying: "We request that PISD clearly communicate to students and staff that any retaliatory action taken against district families they might believe responsible for raising state-church issues with the school will not be tolerated."

The school district must take action, FFRF said, to ensure that staff no longer participate in See You at the Pole or religious clubs. "Because Wright, not students, organized the First Priority Club it should be disbanded. If students wish to reform a religious club, that is their responsibility, not the staff's," said Seidel. The cross and plaque about God's plans must be removed as well, along with any other religious iconography in the schools.

FFRF is a nonprofit state/church watchdog with more than 23,000 members nationwide, including nearly 1,000 in Texas.