FFRF victory: 'Jesus Welcomes You To Hawkins' sign to come down 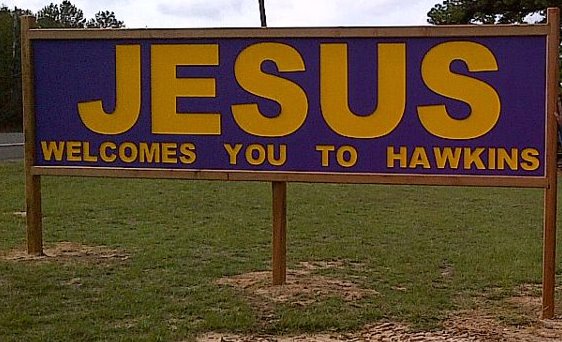 After months of community turmoil and divisive religious pandering by the mayor of Hawkins, Texas, the Hawkins City Council voted Monday to remove the controversial sign reading "Jesus Welcomes You To Hawkins" from city property.

The Freedom From Religion

After months of community turmoil and divisive religious pandering by the mayor of Hawkins, Texas, the Hawkins City Council voted Monday to remove the controversial sign reading "Jesus Welcomes You To Hawkins" from city property.

The Freedom From Religion Foundation first wrote a letter to the city of Hawkins in June, asking that the city remove the sign due to its promotion of a Christian message. Staff Attorney Sam Grover wrote that the sign "sends a message to the city's citizens that the Hawkins government is endorsing and compelling belief in a particular god." As such, the sign violates the Establishment Clause of the First Amendment.

Mayor Will Rogers reacted negatively to the letter, making such statements as "Jesus is not a religion, Jesus is in every religion across the globe." Later, he compared Jesus to Superman, stating, "If you don't believe that Jesus existed, then he would be fiction. If he's fiction, and you want to remove his name from everything then you need to remove every fiction name that there is across the country. That means we couldn't say Superman welcomes you to town."

The mayor also insisted that the sign was the idea of private citizens, even though the city council voted to erect it on public property in 2011. Will Rogers composed the wording himself, before becoming mayor, and had public schoolchildren paint it, magnifying the state/church entanglement.

The Hawkins City Council, after conducting a land survey to verify that the sign was indeed on city property, voted to remove the Jesus sign and place it in storage within the next 30 days.

"We're so pleased that reason and our secular Constitution have prevailed," noted FFRF Co-President Annie Laurie Gaylor. "This kind of endorsement message belongs on a private church marquee, not city property."

"We're happy that the city of Hawkins will respect the rights of citizens of no religion or any religion to live in a city free from government-imposed proselytization."