Much of FFRF's report is built on public records it requested from universities. FFRF sent Auburn an open records request in September 2014, and sent a $500 deposit for the records that December. The university has refused to provide any records and ceased all contact with FFRF since April 10, 2015. FFRF is now considering an open records lawsuit against the university and has consulted with Alabama attorneys.

Although the university has refused to provide records, FFRF's independent research shows that Chette Williams, Auburn's football chaplain, is very much treated as a part of the team. Williams has an office in the stadium, typically wears AU branded clothing, organizes religious revivals for the team, is regularly referred to by official or official-sounding names, leads the team in prayer, baptizes players, randomly attends other team practices and meetings, travels with the team, and much more—even though technically the university does not employ him. This public university grants him special privileges and unrestricted access because he is a Christian clergyman, FFRF charges. 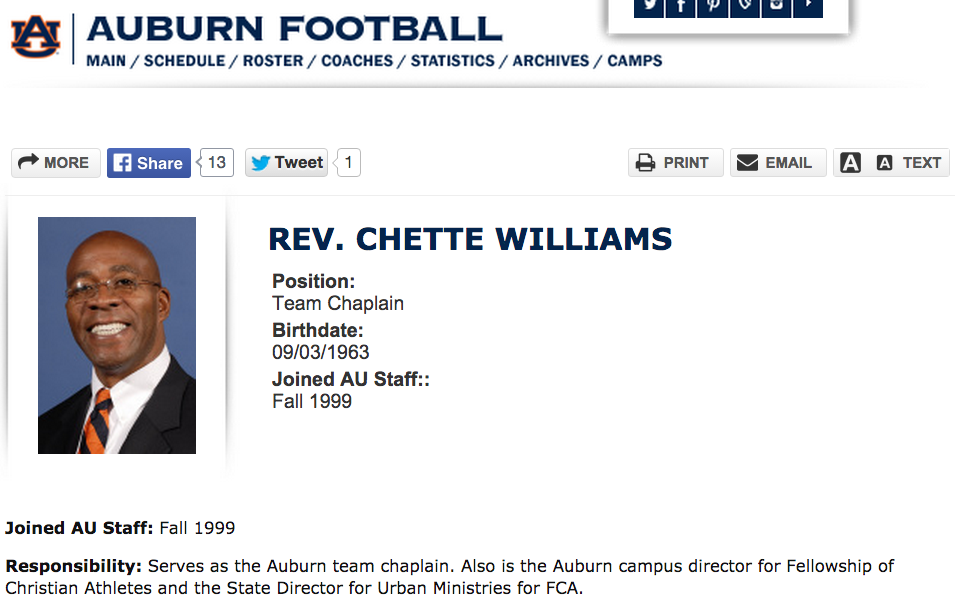 If there is any doubt about Williams' official standing with the team, the Auburn football website makes it clear.

Former head coach Tommy Tuberville appointed Williams in 1999, one of his "first moves" as head coach, claiming the team experienced a "tremendous spiritual revival ... moved on the Auburn team since his arrival. ... players are getting baptized, carrying around Bibles and wearing wooden cross necklaces."

About 10 years ago Williams claimed that he had baptized 20 players during his first six years as chaplain. Williams continues to dunk Auburn players, including Sammie Coates and Trovon Reed in 2013 and Jeff Whitaker in 2012. Today, the number of Auburn football players baptized by Williams could easily exceed 50.

Tuberville also brought his Ole Miss chaplain, Wes Yeary, to Auburn in 2007. With Tuberville's help and financial support, Williams and Yeary set up a training camp for team chaplains and an internship program hosted by Auburn.

"No student athlete should be baptized as part of a public university sports program, or be put in the position of feeling they have to pray to play," said FFRF Co-President Annie Laurie Gaylor.

"We find the lack of sunlight at Auburn shocking," Gaylor said.

Tuberville's latest chaplain hire, Antrione Archer at the University of Cincinnati, who instructed players on appropriate "sexual conduct" in his role as chaplain, was jailed THIS YEAR (IF TRUE) for sexually assaulting a 73-year-old Kroger grocery store employee.