The Freedom From Religion Foundation's expose, "Play to Pray," on unconstitutional Christian chaplaincies at public college football programs singles out University of Georgia as one of the major offenders. FFRF wrote to 20 universities, including GA President Jere Morehead,

The Freedom From Religion Foundation's expose, "Play to Pray," on unconstitutional Christian chaplaincies at public college football programs singles out University of Georgia as one of the major offenders. FFRF wrote to 20 universities, including GA President Jere Morehead, asking him to abolish the chaplaincy and adopt the model policy in FFRF's report.

Kevin "Chappy" Hynes, UGA's chaplain and brother-in-law to head coach Mark Richt, is on a mission to win souls, FFRF charges. Championships are great, but souls are better: "Our message at Georgia doesn't change, and that's to preach Christ and Him crucified, it's to win championships for the state of Georgia and win souls for the Kingdom of God, so we're going to continue down that path." He also "tr[ies] to get these guys plugged in to church..." 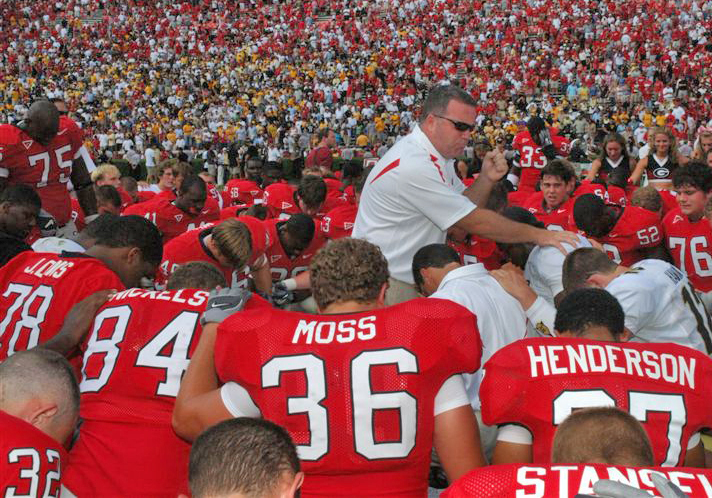 Richt fundraises for his brother-in-law's chaplain position and the Fellowship of Christian Athletes. At a gala event in the Butts-Mehre football complex in July of 2014, Richt helped bring in big money for the FCA. The gala featured a silent auction with UGA memorabilia, including an "authentic Todd Gurley home red jersey."

The relationship Richt and Hynes have with players highlights the influence these coaches have in their players' lives and the inherently coercive nature of that relationship. Just this year, Georgia players thanked head coach Mark Richt for being "the father figure I so desperately needed" and for being a "father figure... to every young man that needed" it. That father-son-like relationship means coaches need to tread even more carefully when it comes to students' rights of conscience. It "should not be used as a license to convert the trusting student athlete to the coach's religion," the report notes.

Richt converted to Christianity when he was an assistant coach to FSU head coach Bobby Bowden. Richt said that Bowden "presented the Gospel to the team ... right there I was convicted [sic] to go see coach the next morning and pray to receive Christ as my Lord and savior." After 15 years with Bowden, Richt left FSU in 2001 to coach at UGA. Richt immediately appointed his brother-in-law, Hynes, as UGA's chaplain. Since then, Richt "has taken his team to churches in the preseason. A devotional service is conducted the night before each game, and a prayer service on game day."

As FFRF's report maps out, many of the modern football chaplains trace back to Bobby Bowden's tenure at FSU.

Even if FCA or other private funds are primarily paying Hynes, that doesn't mitigate the unseemly entanglement, FFRF says. The university is granting Hynes unique access and influence, lending endorsement to his proselytizing.

To view the full report explaining the depth of this problem in college football, go here.
To view the two page executive summary, go here.