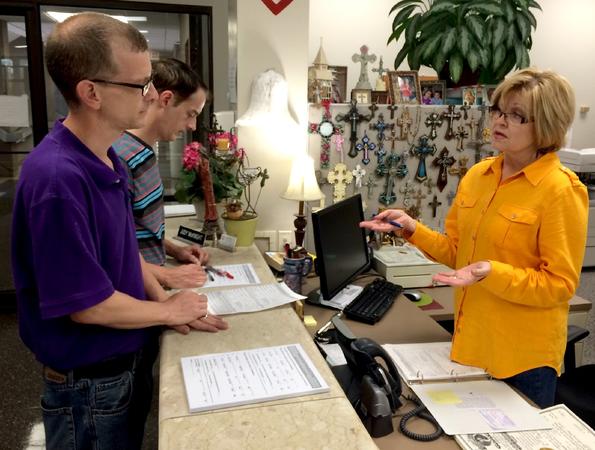 In this photo published in the Longview News-Journal, Gregg County Clerk Connie Wade shows off the county's cross collection

In this photo published in the Longview News-Journal, Gregg County Clerk Connie Wade shows off the county's cross collection

UPDATE: Local news sources are reporting that the crosses have been removed.

The Freedom From Religion Foundation recently sent a letter to Connie Wade, a county clerk in Gregg County, Texas, objecting to more than 20 crosses that are displayed publicly at the county clerk's office.

"The religious significance of the Latin cross is unambiguous and indisputable," FFRF Staff Attorney Rebecca Markert informed Wade, noting that federal courts "have held displays of Latin crosses on public property to be an unconstitutional endorsement of religion."

Markert pointed to several cases in which federal courts upheld restrictions on displays of religious materials in workspaces, even including in some private cubicles or offices, since posting religious displays in areas the public can access could reasonably be seen as government endorsement of religion.

Wade has been in the news for refusing to issue marriage licenses to a Longview same-sex couple, citing the lack of a gender-neutral application.

FFRF asks Wade to take down the cross collection immediately, calling it an "obvious effort to proselytize on behalf of a particular religion."

FFRF is a national state/church watchdog with more than 22,500 members, including 1,000 in Texas.