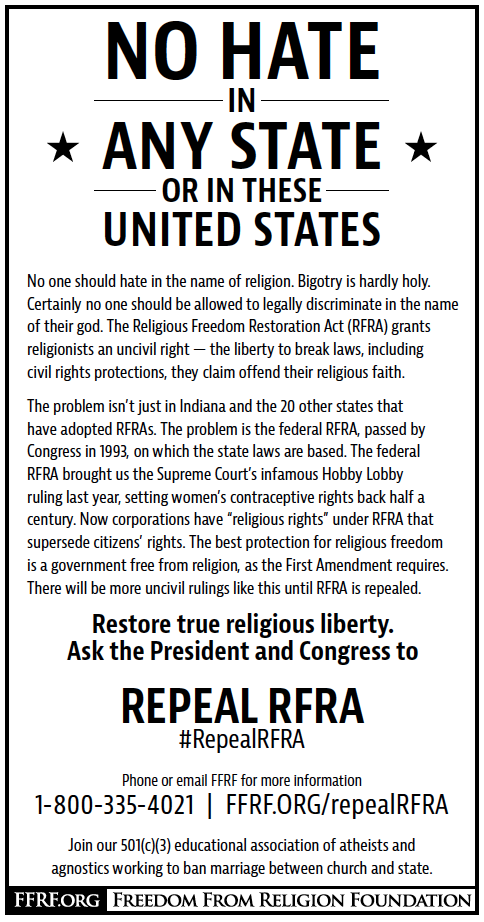 The Freedom From Religion Foundation, a leading opponent of the Religious Freedom Restoration Act, is taking its "Repeal RFRA" campaign to the readers of The New York Times. Its quarter-page advocacy ad, headlined "No hate in any state — or in these United States" is expected to appear in Sunday's Times in the front news section.

The ad points out, "The problem isn't just in Indiana," referring to the national furor erupting over Indiana's RFRA. FFRF points out twenty-some states have passed RFRA, as well as Congress in 1993. View high resolution ad here.

FFRF notes, "The federal RFRA brought us the Supreme Court's infamous Hobby Lobby ruling last year, setting women's contraceptive rights back half a century." The state/church watchdog, with more than 22,000 members nationwide, warns: "There will be more uncivil rulings like this until RFRA is repealed."

"Don't be fooled that Indiana and Arkansas changes to their RFRA laws, to more closely model the federal RFRA, alleviate the problem. The problem is the federal RFRA. The time is ripe. Secularists and those who treasure true religious liberty must now urge Congress, and other RFRA states, to repeal this dangerous law privileging faith over civil rights," said FFRF Co-President Annie Laurie Gaylor.

The ad takes readers to a webpage informing citizens of ways to lobby against RFRA, and background material.