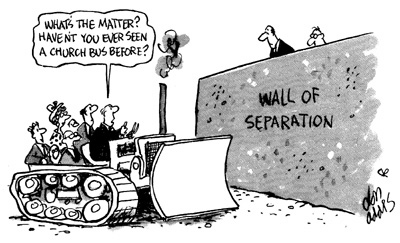 Public Law 100-307 sets the first Thursday in May as "National Day of Prayer." The Foundation is seeking a declaration that the law violates the Establishment Clause of the First Amendment to the U.S. Constitution.

"Mandated Prayer Proclamations by the President exhorting each citizen to pray constitutes an unabashed endorsement of religion," contends the Foundation complaint, filed on behalf of the Foundation by attorney Richard L. Bolton of Boardman Law Firm, Madison, Wis.

The suit alleges that a task force associated with Focus on the Family is "working hand-in-glove" with the government in organizing the National Day of Prayer.

The task force proposes the wording of proclamations and chooses a yearly theme and a bible quote. In 2008, Psalm 28:7, "The Lord is my strength and my shield; my heart trusts in Him and I am helped" was selected by the NDP as its official biblical reference, and was recited in Bush's proclamation and in at least 15 gubernatorial NDP proclamations. Other governors picked up variations of the task force resolution template and the annual theme.

The Foundation Complaint contends that the Establishment Clause "prohibits government officials and persons acting in joint and concerted action with government officials from taking actions that endorse religion, including specific religions in preference to others, as well as preferring religion over non-religion."

"Exhortations to pray in official Presidential proclamations do not constitute ceremonial deism solemnizing some other occasion," the Foundation asserts, but "constitute an end in itself intended to promote and endorse religion."

The Complaint notes that the prayer proclamations "create a bond between church and state," causing such violations as an official prayer breakfast organized on May 1, 2008, by Sheriff Dean Roland, Burnett Co., Wis. The Sheriff organizes an annual prayer breakfast and sends out invitations on Sheriff's Department letterhead. His speaker this year was Wisconsin Supreme Court Justice (Elect) Michael Gableman, who said official acknowledgment of reliance on "Divine Providence" is necessary for our nation's success and well-being.

The suit alleges that the NDP Task Force pressures governors from all 50 states to issue official proclamations, acting "in concert" in a way that aligns them with "the Judeo-Christian principles on which the Task Force is based."

"The concerted actions by these Governors to include the NDP Task Force theme and Biblical reference are not accidental or coincidental; they are the result of joint action with the NDP Task Force." The proclamations "convey to nonreligious Americans that they are expected to believe in God," and send a message that "religion is preferred over non-religion."

"Designations of an official Day of Prayer by Presidential and Gubernatorial proclamations, encouraging celebration of prayer, create a hostile environment for nonbelievers. who are made to feel as if they are political outsiders," continues the Complaint.

"Official Prayer Proclamations by the President and the Governors of the United States adversely affect the ability of FFRF to carry out its organizational mission." The Complaint calls prayer "the quintessential religious act."

Plaintiffs are the Foundation and five of its Wisconsin Lifetime members, who are also volunteers or officers: Anne Nicol Gaylor, President Emerita; Annie Laurie Gaylor and Dan Barker, Co-Presidents; Paul Gaylor and Jill Dean, volunteers and members of the Board of Directors, and Phyllis Rose, volunteer and Foundation officer.