“No magic. No miracles. No imaginary friends.”

Chicago atheists come out of closet in third billboard campaign

The Freedom From Religion Foundation and its chapter, the FFRF Metropolitan Chicago Chapter, this week are placing their third set of friendly but thought-provoking billboards in Chicago, which feature the diverse faces and "testimonials" of local atheists, agnostics and freethinkers.

A final batch of seven new billboards is going up this week, most in various neighborhoods on the north side. They include a billboard featuring a smiling former minister, Rich Pope, of Northfield, proclaiming, "No magic. No miracles. No imaginary friends."

Three of the billboards represent couples. Jenn and Ben Zalisko note, "We found love in an atheist community!" Ray Belmonte and Rick Scuch, who are both physicians and atheists, have a plainspoken message: "Religion is a collection of man-made fairy tales." Their dog, Rufus, is also pictured.

Cheryl Purnell, a graphic designer from Chicago, who identifies as a freethinker, says "Freethought and adventure are my allies!"

Youth is represented by student Viven Castillo, of Chicago, who declares: "This happy heathen is good without God."

"No gods. Just human goodness" is the gentle message of retired veterinarian Allen Cosnow, of Glencoe.

FFRF, the nation's largest association of atheists and agnostics, has more than 21,500 members, including nearly 900 members in Illinois. FFRF also works as a prominent state/church watchdog.

"Although nearly 20% of the population today is nonreligious in the United States, many Americans have never knowingly met an atheist or agnostic," said Annie Laurie Gaylor, FFRF co-president. "We're proud to introduce our Chicago-area members and their viewpoints to their community. Freethinkers have an important message to contribute to society — that reason, not dogma, should prevail, and that freedom depends on keeping religion out of government."

Since debuting the "Out of the Closet" campaign in Madison in 2010, FFRF has taken the personalized campaign to Columbus, Tulsa, Raleigh, Phoenix, Nashville, Portland, Spokane, Sacramento, Cleveland and Akron. Make your own "virtual billboard" or upload a short freethought video statement. 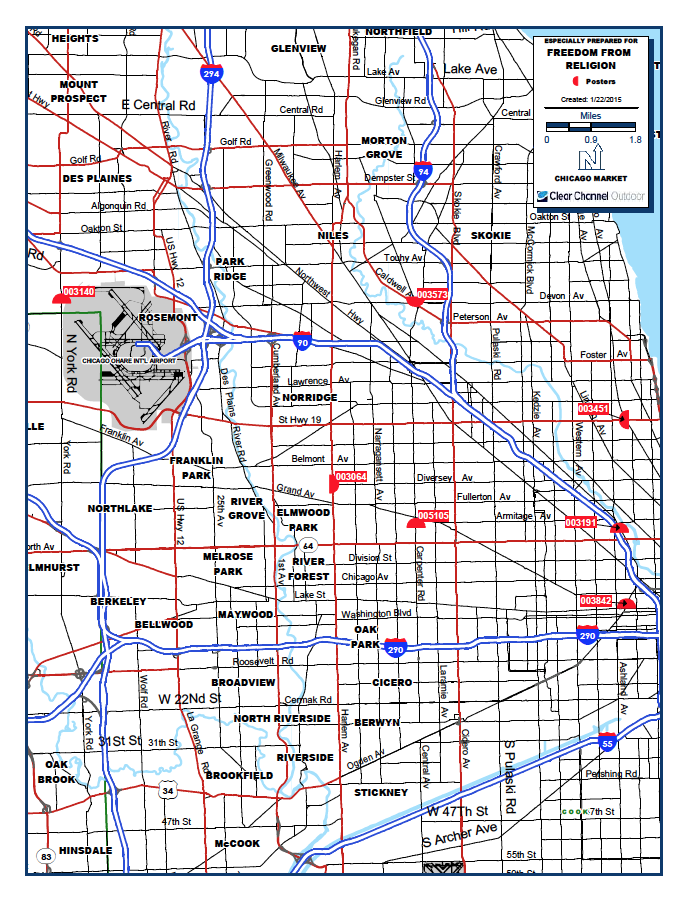