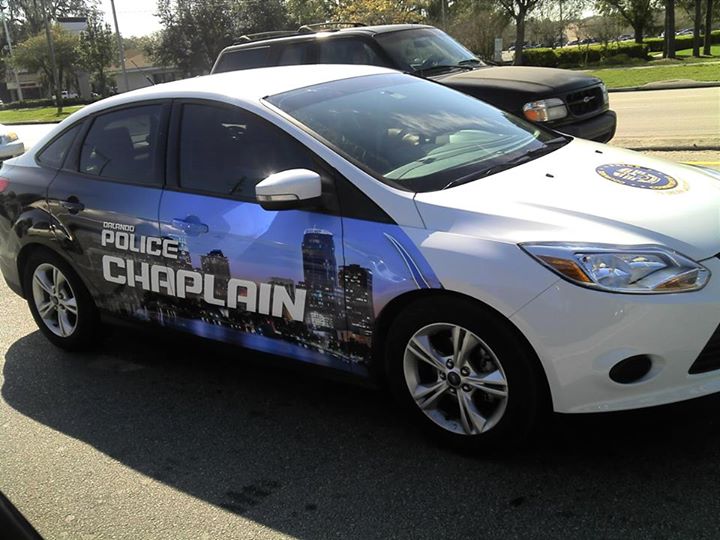 In the last two years, the Orlando (Fla.) Police Department spent about $25,000 on its police chaplain program according to the Freedom From Religion Foundation, a national state/church watchdog.

Most notably, the department spent over $15,000 on a new Ford Focus for chaplain use, and nearly $1,400 on a vinyl "Orlando Police Chaplain" wrap for the car (pictured above), according to records received in response to FFRF's open records request.

Expenditures in just two years included hundreds of dollars on uniforms for chaplains, $1,000 in dues to the International Conference of Police Chaplains (ICPC), and another $1,000 for food, lodging, travel and other costs for one chaplain to attend an ICPC conference.

FFRF's request, submitted in November 2014, asked for records related to the chaplain program going back two years, as well as records of chaplain vehicle purchases from any time. The OPD also spent $13,000 on a chaplain car in 1998.

The chaplains appear to be all Christian pastors. FFRF also learned that chaplains are directly paid a monthly stipend of $150. One chaplain is on paid duty per month.

Also significant are the records FFRF did not receive: no training materials, guidance documents, regulations, or other policies for chaplains were provided. Either the department did not fully comply with FFRF's records request, in violation of the Florida Sunshine Law, or the chaplain program has no formal regulation of or training for chaplains. FFRF is following up with the department on these matters.

"It's appalling that taxpayers are footing this bill," said FFRF Staff Attorney Andrew Seidel, who is investigating the church/state entanglement after receiving local complaints. "Surely that money could be better spent, perhaps organizing actual qualified counselors for OPD employees."

Seidel noted the Florida Constitution provides that no government revenue can be taken from the public treasury "directly or indirectly in aid of any church, sect, or religious denomination or in aid of any sectarian institution."

FFRF is considering its legal options over the entanglement.

FFRF has more than 21,500 members nationwide, including more than 1,000 Florida members, as well as an Orlando-area chapter, Central Florida Freethought Community, directed by David Williamson.