FFRF’s ‘nativity’ goes up in Florida rotunda for second year 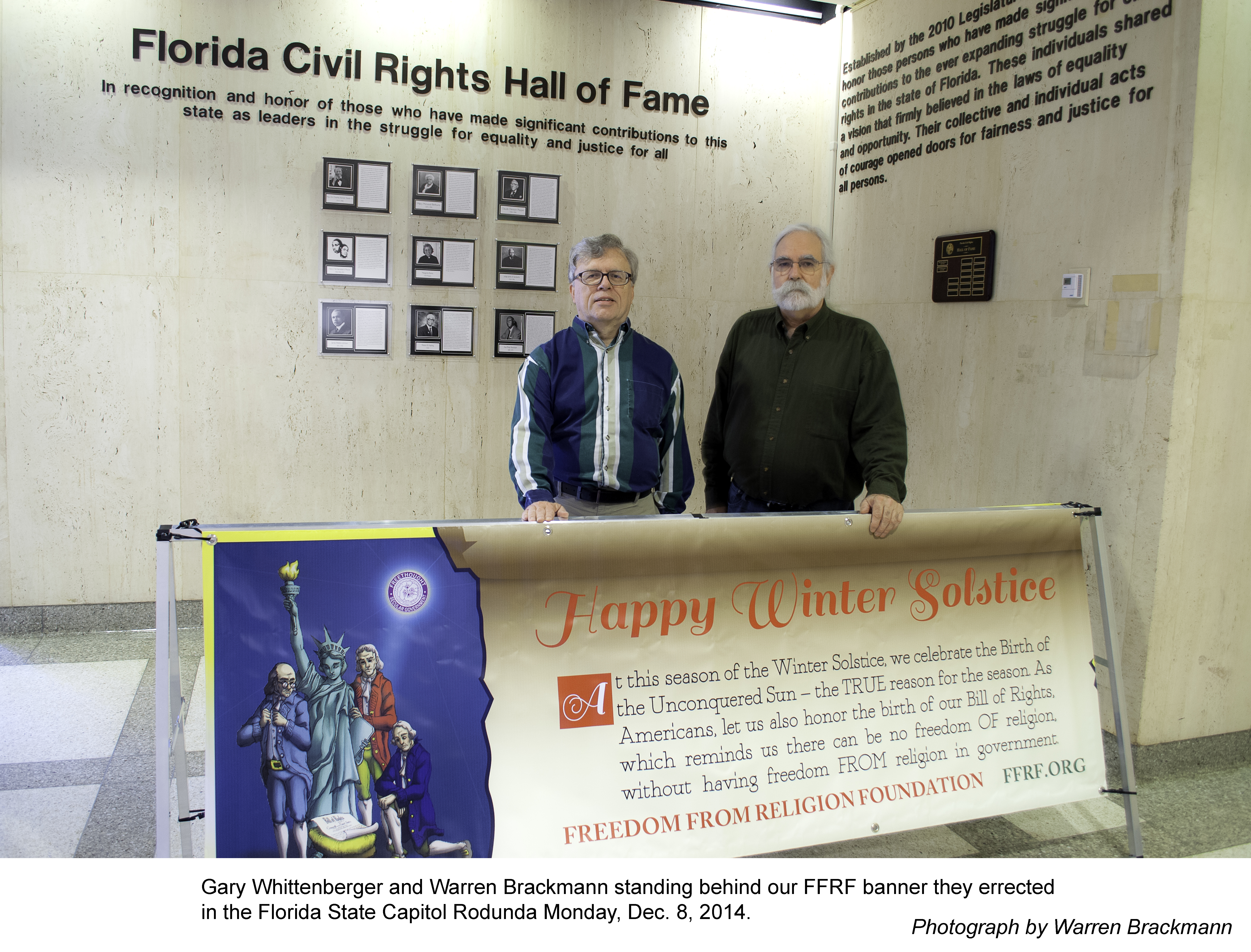 The Freedom From Religion Foundation will place a "Bill of Rights nativity" Monday, Dec. 8, in the Florida State Capitol in Tallahassee proclaiming the Winter Solstice as the "true reason for the season."

The prominent state/church watchdog, the nation's largest association of freethinkers (atheists and agnostics), is placing a two-sided banner in the Florida Capitol on behalf of its more than 1,000 Florida members. The banner depicts a light-hearted nativity scene parody in which Ben Franklin, the Statue of Liberty, Thomas Jefferson, and James Madison on bended knee, gaze adoringly at a copy of the Bill of Rights in a crib.

The FFRF banner honors Dec. 15, the anniversary of adoption of the Bill of Rights, as well as the Winter Solstice on Dec. 21 — the shortest, darkest day of the year — a natural holiday celebrated for millennia in the Northern Hemisphere.

This is the second year for FFRF's display. The banner went up in 2013 to counter a nativity scene in the rotunda. Last year, FFRF's banner prompted others to place irreverent displays, including a Flying Spaghetti Monster and a Festivus pole constructed from Pabst Blue Ribbon beer cans. After a denial last year, capitol officials agreed this year to let the Satanic Temple put up a display of an angel falling into hell, when the group threatened a lawsuit.

"We'd vastly prefer to keep religion — and irreligion — out of the seat of state government. The Capitol ought to be above the fray of religious divisiveness. But if public officials unwisely decide to permit religious public forums, then there must be 'room at the inn' for nonbelievers," FFRF Co-President Annie Laurie Gaylor explained.

Last year's atheist invasion caused the Capitol to revisit their rules. Displays this year will be allowed up for one week only. Last year, all displays were permitted indefinitely. The banner will be displayed Dec. 8 through Dec. 15, FFRF's second choice of dates. FFRF has submitted a records request over the scheduling to ensure the state is playing fair.

At this season of the Winter Solstice, we celebrate the birth of the Unconquered Sun — the TRUE reason for the season. As Americans, let us also honor the birth of our Bill of Rights, which reminds us there can be no freedom OF religion, without having freedom FROM religion in government.

The banner is the same as the one that was just placed in Daley Plaza by FFRF and its Metropolitan Chicago Chapter to counter religious symbols there.

FFRF thanks local FFRF member and activist Gary Wittenberger, who will be placing the sign.