Today marks a turning point in the struggle to uphold the First Amendment to our Constitution. FFRF needs your help more than ever. This is a call to you, and to ask you to reach out to those you know. Please forward this email and encourage others to join us. 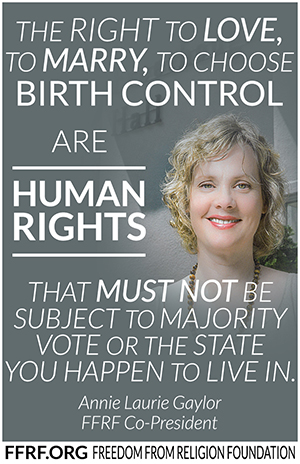 Today the Supreme Court ruled that a for-profit corporation's so-called religious beliefs trump our secular law. This decision is one of "the abuses of liberty" James Madison warned about nearly 250 years ago.

The Court's decision, narrow though it might seem, has opened the proverbial floodgates. The Freedom From Religion Foundation needs your help to protest religious privilege and the federal judiciary's appalling desertion of the founding principles of this nation.

Freethinkers — secularists, atheists, agnostics, anti-theists, humanists, "Nones," the nonreligious — cannot remain quiet and disengaged. This decision ensures that the struggle to keep our government and legal system secular will affect you. Maybe your employer will suddenly "find God" as an excuse to lower the bottom line and you'll lose birth control coverage. Maybe some big box stores you frequent will cite their "right" to refuse to promote women as managers, because women should "be busy at home" as Titus 2:5 commands. Maybe a gay family member, friend or neighbor will be denied service by a place of public accommodation when they plan a wedding. So-called "religious protection legislation" has already been passed by a few states with express intent to free religious vendors and individuals from the dictates of the Civil Rights Act.

The Court jettisoned our nation's basic premise: that laws cannot restrict beliefs, but they can govern actions. In 1878, the Supreme Court held that: "Laws are made for the government of actions, and while they cannot interfere with mere religious belief and opinions, they may with practices. Suppose one believed that human sacrifices were a necessary part of religious worship, would it be seriously contended that the civil government under which he lived could not interfere to prevent a sacrifice? Can a man excuse his practices [that are contrary to law] because of his religious belief? To permit this would be to make the professed doctrines of religious belief superior to the law of the land, and in effect to permit every citizen to become a law unto himself." Reynolds v. United States, 98 U.S. 145, 166-67 L. Ed. 244 (1878).

Today's decision is also an affront to the reproductive rights of American women. No religious employer has the right to dictate which prescriptive birth control method women employees may or may not choose.

Once again an all-Catholic, all-male, all-ultra-conservative majority of five has voted en bloc to eviscerate fundamental rights. The Affordable Care Act's requirement that employers who provide health care coverage must offer preventive care, including prescriptive contraceptives, does not violate the rights of Hobby Lobby, even though it is run by a fundamentalist zealot.

Religious privilege has been given a legal sanction. FFRF will continue our fight to uphold our secular Constitution and the godless republic it created, and we need your help.

What can I do?

The Court abandoned founding principles today. The decision cannot stand; it is untenable. But we'll need help to reverse this decision and our society's drift toward elevating unsupported religious beliefs over rational law. Please help us restore Jefferson's "wall of separation between church and state."

With thanks to Andrew L. Seidel.