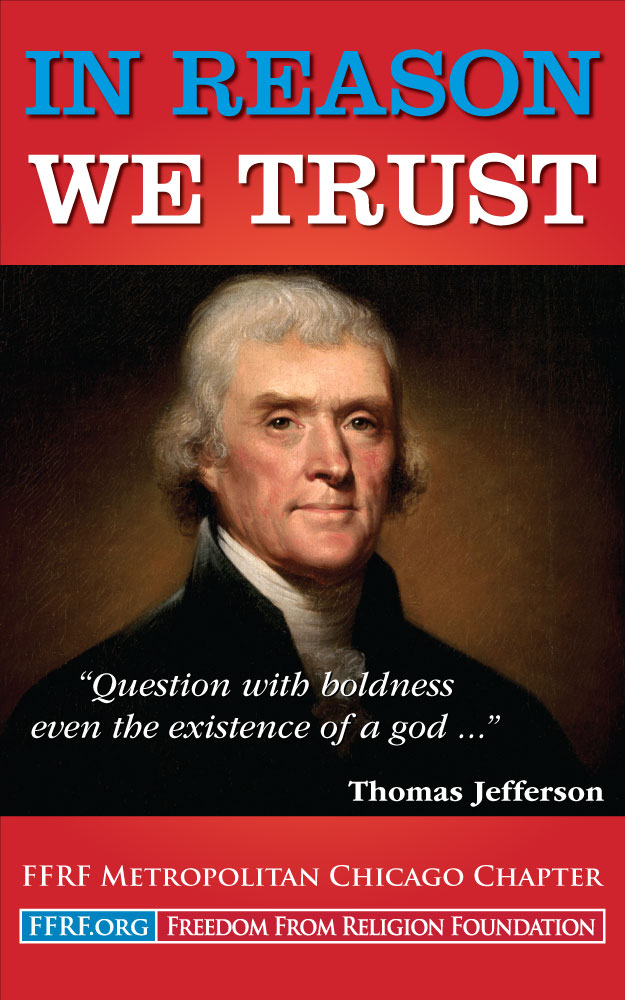 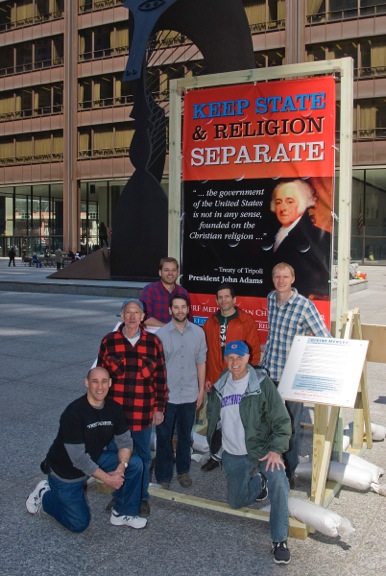 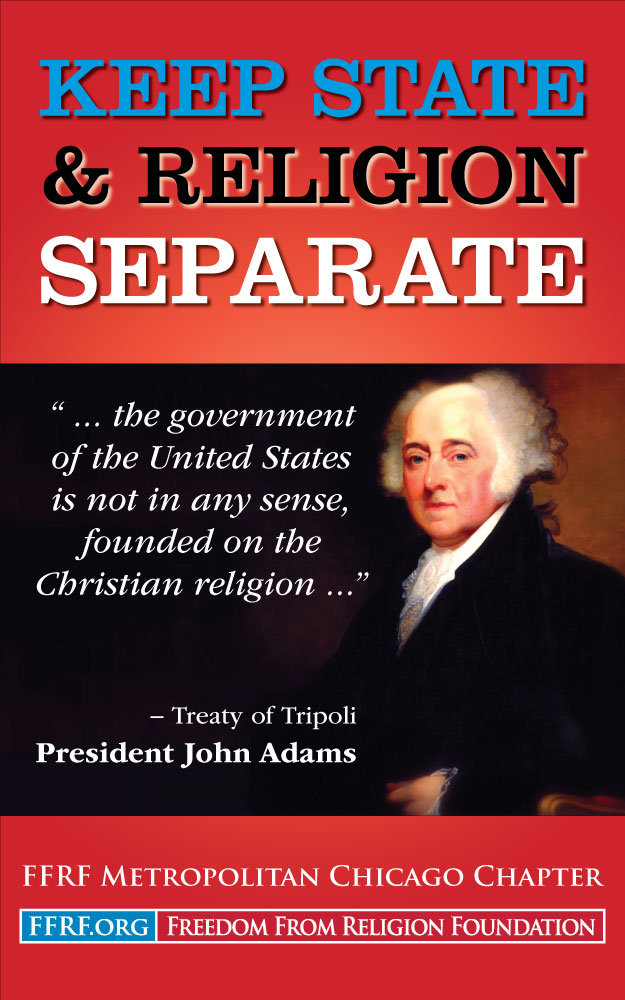 The nation’s largest association of atheists and agnostics this morning is placing a patriotic red-white-and-blue secular display to counter a large Catholic Easter display at Daley Plaza in downtown Chicago that will be hard to miss.

Two colorful 8-foot banners on a 12-foot structure promoting the secular views of founding fathers will be placed by noon in Daley Plaza by the Madison, Wis.-based Freedom From Religion Foundation and its FFRF Metropolitan Chicago chapter. Three FFRF staff attorneys — Patrick Elliott, Andrew Seidel and Sam Grover — have driven to Chicago from Madison to install the display with chapter help on a wooden structure they built for the back-to-back banners.

One banner reads: “In Reason We Trust,” and pictures Thomas Jefferson, displaying his famous advice to a nephew, “Question with boldness even the existence of a god.” The other side proclaims, “Keep State & Religion Separate,” and pictures President John Adams, who signed the Treaty of Tripoli, which assured “. . . the government of the United States is not in any sense, founded on the Christian religion. . .”

The FFRF display is designed to counter nine days of round-the-clock prayer and evangelism in Daley Plaza by the Thomas More Society, a Catholic group, which has evangelized in the plaza every Easter since 2011. The group’s aim, through its “Divine Mercy Project,” is to seek the “conversion of Chicago, America and the Whole World.”

The Catholic society is expected to place a 10-foot-tall painting of Jesus on Friday, which it claims was miraculously inspired, with the statement “Jesus, I trust in you.” The painting is accompanied by a 14-foot cross on the public plaza. In past years, Catholic supporters have also held 24-hour prayer vigils, distributed thousands of prayer cards and hosted anti-abortion rallies in front of the Jesus painting.

FFRF additionally has two smaller posters affixed to each side of its display, explaining its purpose, written by Tom Cara, Chicago chapter director: “Not looking to convert? Neither are we,” protesting use of government property to endorse the beliefs of a specific religious group. Another poster questions the “divine mercy” of the bible upon which Catholicism is predicated.

FFRF thanks Patrick Elliott, Andrew Seidel and Sam Grover for “yeoman” work in fashioning the display, and Tom Cara and other volunteers with its active Chicago chapter. 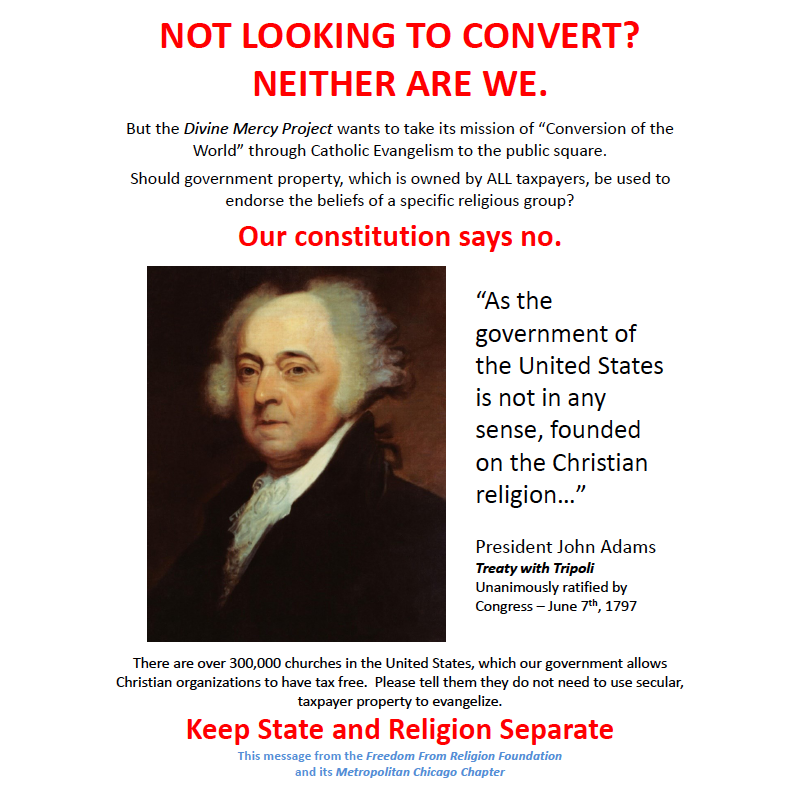 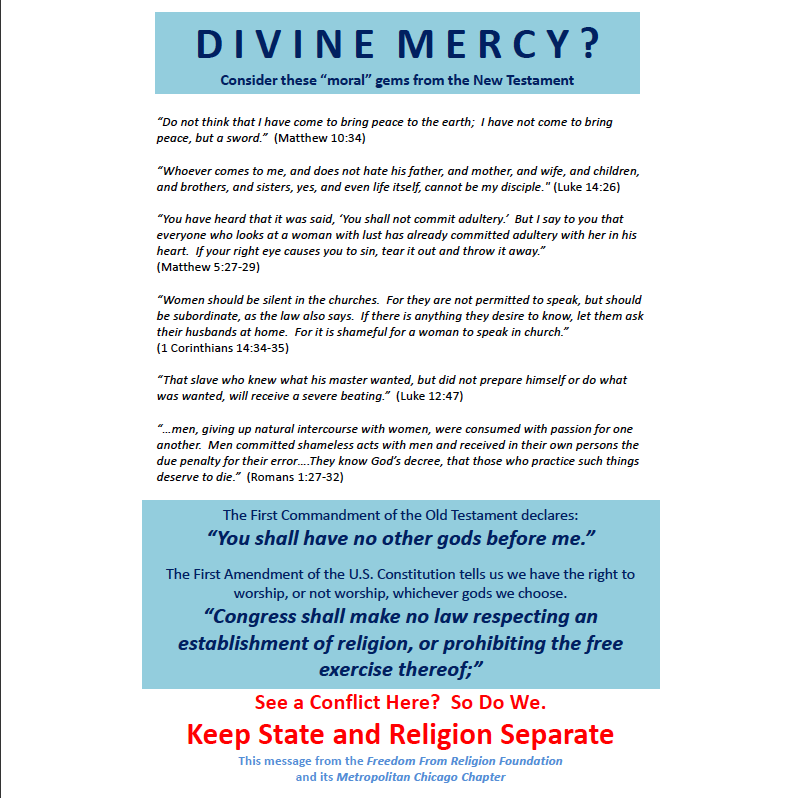