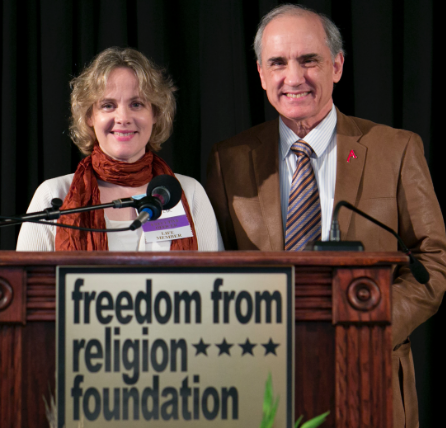 In speaking with Megyn Kelly on FOX News this week about The Freedom From Religion Foundation’s victory in persuading Iowa State University to remove Gideon bibles from state-owned hotel rooms, you made this remark about our organization:

“Let me read you from their statement. This is what they stated in their press release crowing about this decision:

“We are delighted to see reason and the Constitution prevail, and we can all sleep easier knowing secularism is being honored at our public universities,” said the co-president Annie Laurie Gaylor. “Many nonbelievers greatly object to its primitive and dangerous instructions to beat children, kill homosexuals, atheists and infidels, and that it sanctions the subjugation of women who are scapegoated for bringing sin and death into the world.”

“I have to question, ‘Did they ever read that book, the bible?’ Because that’s not in the bible.”

Yes, Tony, we have read the bible. Annie Laurie has read it through, cover-to-cover, and continues to study and reference it for research. She has written a book about it: Woe To The Women—The Bible Tells Me So: The Bible, Female Sexuality & the Law. She also edited the comprehensive anthology, Women Without Superstition—‘No Gods, No Masters’: The Collected Writings of Women Freethinkers of the 19th and 20th Centuries, which includes serious criticism of the biblical texts.

As co-president of FFRF, with Annie Laurie, Dan has read the bible many times. He was an ordained evangelical minister and evangelist who preached for more than 19 years before becoming an atheist. In Dan’s words: “I am not the world’s leading expert on the bible — and neither are you — but I can read the New Testament Greek. I preached from every book of the bible during my years of ministry. My books Losing Faith in Faith: From Preacher to Atheist and Godless: How an Evangelical Preacher Became One of America’s Leading Atheists, delve deeply into biblical passages. To date, I have done 115 formal public debates with theists, mostly Christians, in which the questionable reliability, historicity, and morality of the bible are topics often discussed.”

We question if you have actually read the bible, other than the more palatable passages. Questioning our objections, you said, “That’s not in the bible.” You are wrong. Let us educate you about the bible, that bestseller that is rarely read by believers:

“Do not withhold discipline from a child; if you strike him with a rod, he will not die.” (Proverbs 23:13)

“For whom the Lord loves He chastens, and scourges [beats with a whip] every son whom He receives. If you endure chastening, God deals with you as with sons; for what son is there whom a father does not chasten?” (Hebrews 12:6-7)

“Whoever spares the rod hates his son, but he who loves him is diligent to discipline him.” (Proverbs 13:24)

“The rod and reproof give wisdom, but a child left to himself brings shame to his mother.” (Proverbs 29:15)

“Folly is bound up in the heart of a child, but the rod of discipline drives it far from him.” (Proverbs 22:15)

“God commanded, saying, Honour thy father and mother: and, He that curseth father or mother, let him die the death.” (Matthew 15:4)

“Happy shall he be that taketh and dasheth thy little ones against the stones.” (Psalm 137:9)

“If a man has sexual relations with a man as one does with a woman, both of them have done what is detestable. They are to be put to death; their blood will be on their own heads.” (Lev. 20:13)

“If thy brother, the son of thy mother, or thy son, or thy daughter, or the wife of thy bosom, or thy friend, which is as thine own soul, entice thee secretly, saying, Let us go and serve other gods, which thou hast not known, thou, nor thy fathers; Namely, of the gods of the people which are round about you . . . Thou shalt not consent unto him, nor hearken unto him; neither shall thine eye pity him, neither shalt thou spare, neither shalt thou conceal him: But thou shalt surely kill him; thine hand shall be first upon him to put him to death, and afterwards the hand of all the people. And thou shalt stone him with stones, that he die.” (Deuteronomy 13:6-10)

“If a man or woman living among you in one of the towns the Lord gives you is found doing evil in the eyes of the Lord your God in violation of his covenant, and contrary to my command has worshiped other gods, bowing down to them or to the sun or the moon or the stars in the sky, and this has been brought to your attention, then you must investigate it thoroughly. If it is true and it has been proved that this detestable thing has been done in Israel, take the man or woman who has done this evil deed to your city gate and stone that person to death. . . . The hands of the witnesses must be the first in putting that person to death, and then the hands of all the people. You must purge the evil from among you.” (Deuteronomy 17:2-7)

“And the LORD spake unto Moses, saying . . . he that blasphemeth the name of the LORD, he shall surely be put to death, and all the congregation shall certainly stone him.” (Leviticus 24:13-16)

Kill the CHILD of the blasphemer!

Because by this deed thou hast given great occasion to the enemies of the LORD to blaspheme, the child also that is born unto thee shall surely die . . . And the LORD struck the child that Uriah’s wife bare unto David, and it was very sick . . . And it came to pass on the seventh day, that the child died. (2 Samuel 12:14-18)

“Unto the woman he said, I will greatly multiply thy sorrow and thy conception; in sorrow thou shalt bring forth children; and thy desire shall be to thy husband, and he shall rule over thee.” (Genesis 3:13-16)

“Wives, submit yourselves to your husbands, as is fitting in the Lord.” (Colossians 3:18)

[NOTE: The Greek for “submit” is hypotasso, a military term meaning “to rank under.” It is the same word used to tell slaves to submit to their masters (Titus 2:9), and children to their elders (I Peter 5:5).]

[Women are scapegoated] "Let the women learn in silence with all subjection. But I suffer not a woman to teach, nor to usurp authority over the man, but to be in silence. For Adam was first formed, then Eve. And Adam was not deceived, but the woman being deceived was in the transgression." (I Timothy 2:11-14)

“Let your women keep silence in the churches: for it is not permitted unto them to speak; but they are commanded to be under obedience as also saith the law. And if they will learn any thing, let them ask their husbands at home: for it is a shame for women to speak in the church.” (1 Corinthians 14:34-35)

The bible calls us nonbelievers fools: “The fool has said in his heart, ‘There is no God’.” (Psalm 14:1, 53:1) It also says we are immoral and filthy, and have never done anything good:

Under what possible interpretation could this not be an insult? If the hotel were placing books in rooms saying, “All Jews are filthy,” would there be no complaint? If government-owned hotels were putting literature in their drawers that said “All Christians are deluded and dangerously mentally ill,” would believers simply ignore it? You know there would be a massive outcry by Christians opposed to their government intruding and interfering with matters of private conscience.

Please acknowledge that your comments are wrong. We have indeed read the bible and know that its dogma about the rights of women, nonbelievers, children, and gays has no place in our secular government. This is one of the reasons we work to defend the constitutional principle of separation between state and church and to protect the First Amendment.

Our work and educational efforts do not limit your liberty to believe or worship. In America, we are free to disagree about religious issues; but we are not free to ask our government to settle the argument.