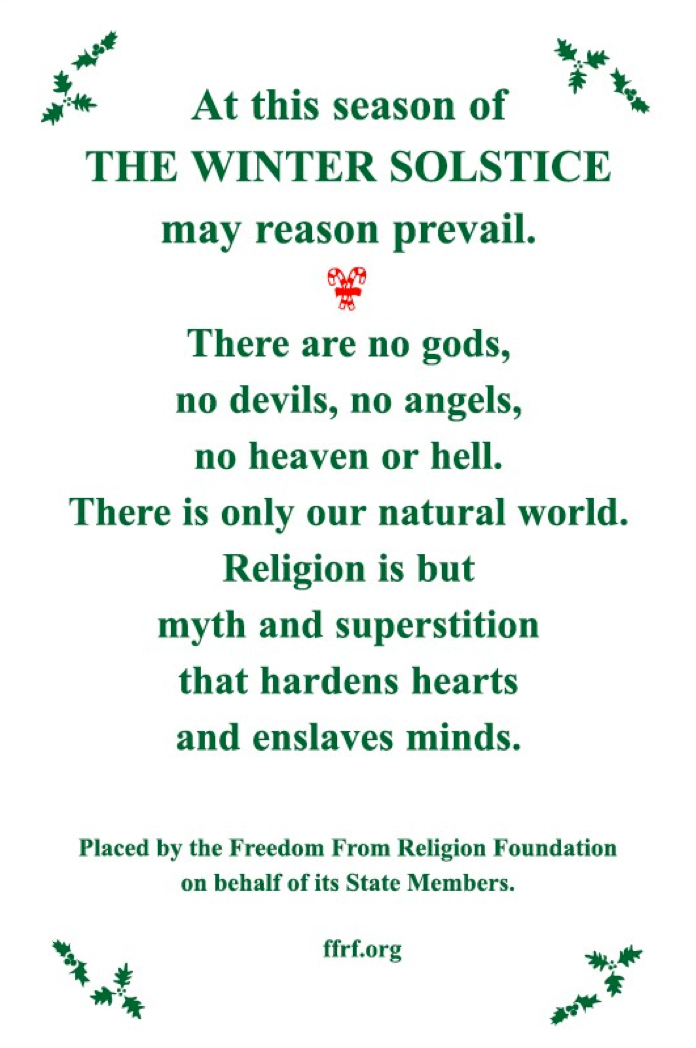 'Tis the season . . . for the Freedom From Religion Foundation's Winter Solstice message, which returns Saturday to the Illinois Capitol in Springfield.

The sign, first placed several years ago to counter a Christian display, took a sabbatical last year, but is back for the month of December. A member of the Freedom From Religion Foundation is returning the festive green and white sign Saturday.

The solstice message in the Capitol was composed by Anne Nicol Gaylor, Foundation co-president emerita, and says:

"At this season of the Winter Solstice, may reason prevail.
There are no gods, no devils, no angels, no heaven or hell.
There is only our natural world.
Religion is but myth and superstition that hardens hearts and enslaves minds."

The same message goes up annually in the Wisconsin State Capitol, and 2013 marks the 18th year of this nontraditional tradition.

FFRF is a national state/church watchdog based in Madison, Wis., with nearly 20,000 nonreligious members nationwide, including nearly 800 in Illinois.

The Winter Solstice, the shortest and darkest day of the year, takes place this year on Friday, Dec. 21. This natural holiday signals the return of the sun and the new year, and has been celebrated for millennia in the Northern Hemisphere with festivals of light, evergreens, feasts and gift exchanges.

"We don’t think that religion, or irreligion, belong at the seat of state government. But if religious displays are going up in state capitols, then our display representing the freethought point of view will be there, too. In celebrating the Winter Solstice, we celebrate reality,” said FFRF Co-President Annie Laurie Gaylor

Dan Barker, FFRF co-president, said Christians tend to think "they own the month of December. We don't agree. No month is free from pagan reverie!"

FFRF and its Metropolitan Chicago chapter just erected an elaborate outdoor winter solstice display at Daley Plaza, Chicago, featuring a tall red “A” beside a sign explaining that “A is for atheism,” and a banner celebrating the natural holiday of the Winter Solstice, depicting an irreverent “nativity”: founding fathers kneeling in reference beside a manger depicting the Bill of Rights. Dec. 15 is the anniversary of the adoption of our Bill of Rights.