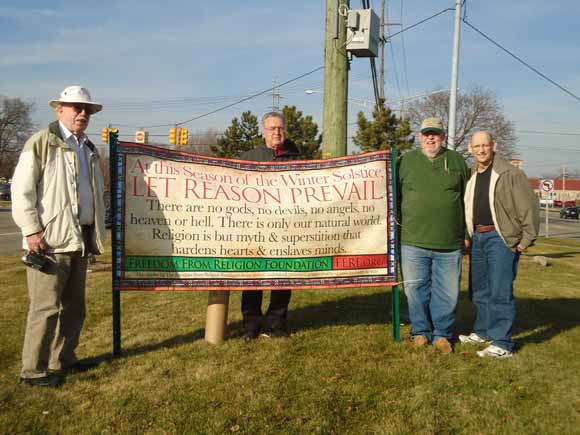 A thief or thieves in Warren, Mich., stole the Freedom From Religion Foundation's Winter Solstice banner several days after it was put in place to counter a religious nativity scene on public property. It was vandalized on Dec. 16, the day after it was put up, when one of the steel fence posts it was attached to was removed. It disappeared on Solstice Eve.

The 7½-by-3 foot banner in the public median on Mound Road states: “At this Season of the Winter Solstice, LET REASON PREVAIL. There are not gods, no devils, no angels, no heaven or hell. There is only our natural world. Religion is but myth & superstition that hardens hearts and enslaves minds.”

FFRF member Douglas Marshall had gotten a permit for it from the Macomb County Department of Roads.

The Foundation is offering a $1,000 reward for information leading to the arrest and conviction of the responsible party or parties, said Co-President Annie Laurie Gaylor.

" 'Thou shalt not steal' is one of the tenets that people who typically oppose FFRF supposedly live by," Gaylor said. "I guess it's all part of the war on reason."

The banner is valued at more than $100. The Foundation is replacing it with another.

Gaylor expressed appreciation to Marshall and other FFRF supporters in the area for their work, particularly the extra work brought about due to the vandalism and thievery. Marshall filed an official report with the police. Those with any leads on the crime should contact FFRF directly.