The Freedom From Religion Foundation has placed a bold 14x48-foot billboard bulletin saying “Ban Marriage Between Church and State” in Smithville, Mo., in America’s heartland. FFRF’s bright purple billboard, adorned with a background rainbow, is hard to miss. It was placed to counter a nearby billboard message saying “1 Man, 1 Woman, Forever,” in downtown Smithville put up by Catholic Radio. (See photo below.)

FFRF’s newest billboard slogan, affirming the constitutional principle of separation between state and church, can be found on Highway 169 one mile north of Highway 92 in Clay County.

According to Smithville’s official city website, it has a population of about 8,400, is a suburb of Kansas City, Mo., and is within commuting distance of St. Joseph, Mo. Smithville Lake is part of a 7,700-acre Army Corps of Engineers recreational lake and park that attracts about 170 bald eagles. That same city website advertises 14 churches.

FFRF launched its newest billboard slogan at the request of Matt Gaines, a member of FFRF and resident of rural Smithville.

Gaines said he feels the Catholic-sponsored sign is offensive to gay couples — and even to anyone who has gone through a divorce:

"To denigrate other people's relationships or the decisions they have had to make with their outdated religious dogmas is simply shameful," said Gaines.

Said FFRF Co-President Annie Laurie Gaylor: “The only organized opposition to marriage equality comes from the Religious Right. Mormon, Roman Catholic and fundamentalist Protestant churches and organizations have spent hundreds of millions to amend state constitutions to ban gay marriage in the name of Christianity. Religious dogma must be kept out of our secular laws.”

Gaylor thanked Matt Gaines, not only for helping to locate the billboard, but for donating toward the costs. FFRF places billboards where local members request them and help make it possible.

FFRF is a 501(c)(3) educational charity with more than 18,500 nonreligious members nationwide, including more than 270 in Missouri. FFRF began a national billboard campaign in the fall of 2007, and has since placed hundreds of secular slogans on billboards in more than half the states. FFRF functions as a state/church watchdog, ending many constitutional violations through legal work and litigation. 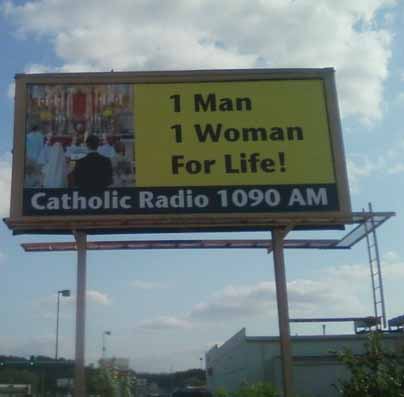