There are 2 entries for this date: Alexander Pope and Robert Creeley 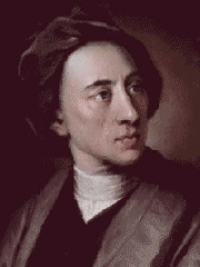 On this date in 1688, Alexander Pope was born in England. He was educated in Catholic schools. Pope contracted tuberculosis with the complication of Pott's disease, or TB of the spine, giving him a hunchback and an adult height of 4 feet, 6 inches. Despite health problems, Pope was a published poet by his teens. He became his generation's most-respected and popular poet, able to support himself with his writings. A deist and poet of the Enlightenment, his most famous couplet is "Know then thyself, presume not God to scan / The proper study of mankind is man." (Essay on Man, 1733.)

Essay on Man, a grouping of epistles, also contains the lines: "For modes of faith let graceless zealots fight / He can't be wrong whose life is in the right." Pope also wrote: "Slave to no sect, who takes no private road / But looks through Nature up to Nature's God."

His Pope's "Universal Prayer" (excerpt below) was likewise deistic. Pope contributed many immortal phrases, such as "damn with faint praise" (Satires and Epistles, Prologue to Dr. Arbuthnot), "a little learning is a dangerous thing" and "To err is human / to forgive divine." (An Essay on Criticism.) D. 1744.

"What conscience dictates to be done,
Or warns me not to do,
This teach me more than Hell to shun,
That more than Heaven pursue." 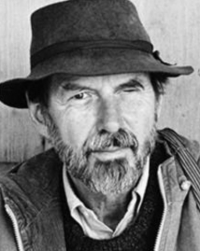 On this date in 1926, poet Robert White Creeley was born in Arlington, Mass. His physician father died when Creeley was 4; earlier he had lost his left eye in a car accident. He attended Harvard University from 1943-46 but took time off to serve in the American Field Service as an ambulance driver in Burma and India during World War II.

Creeley returned to Harvard after the war but didn't graduate. He later received a B.A. from North Carolina's Black Mountain College and an M.A. from the University of New Mexico. During the 1950s, he taught at Black Mountain (an experimental college that operated from 1933-57) and edited the Black Mountain Review, still recognized as a significant, experimental “little magazine.”

Creeley published over 60 books of poetry, one novel and more than a dozen works of prose, essays and interviews. According to the Poetry Foundation, he transformed American poetry "by being more conversational and emotionally direct" and is credited with formulating the concept that “form is never more than an extension of content.” He taught English and poetics at the State University of New York in Buffalo for over 30 years and lectured academically on poetry at schools around the world.

He married Ann MacKinnon while at Harvard, and in the late 1940s they lived in New Hampshire before moving to France and the island of Mallorca, where they founded the short-lived Divers Press. Creeley left Black Mountain in 1956 and immersed himself in the poetry renaissance in San Francisco with Allen Ginsberg, Gary Snyder, Kenneth Rexroth and others, while befriending Jack Kerouac.

After divorcing he moved to New Mexico, where he taught and married Bobbie Louise Hawkins before filling his professorial chair at SUNY-Buffalo. They divorced in 1976 and the next year Creeley married Penelope Highton, a New Zealander. He also served as New York state poet laureate from 1989-91 and was elected a chancellor of the Academy of American Poets in 1999. He died at age 78 of complications of pneumonia while living with Penelope in Marfa, Texas. He had seven children and one stepchild. The Robert Creeley Foundation honors his legacy. D. 2005.

"I believe in a poetry determined by the language of which it is made. ... I look to words, and nothing else, for my own redemption."