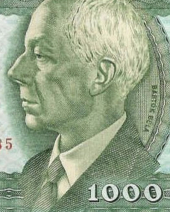 On this date in 1881, composer, pianist and ethnomusicologist Béla Bartók was born in Nagyszentmiklós, Hungary. He and Franz Liszt are regarded by many as the greatest Hungarian composers. Trained in piano and composition at the Budapest Academy of Music, Bartók began his career as a touring pianist in 1903. His talents as a composer soon became apparent, and Bartók assumed a professorship at the academy in 1908.

He drew inspiration from the folk music of the Balkans and other regions while engaging in intense studies of harmonic practices, including those of contemporary French composers. While not an expert in stringed instruments, Bartók’s compositions displayed a preternatural understanding of the violin: “He enriched [the violin’s] repertoire with such essential works as his two Sonatas for Violin and Piano (of 1921 and 1922, respectively), two Rhapsodies for Violin and Orchestra (1928-29), 44 Duos for Two Violins (1931), and the Sonata for Solo Violin (1944).” (New York Philharmonic.)

His childhood Catholicism was gone by early adulthood. "By the time I had completed my 22nd year, I was a new man — an atheist.” (Béla Bartók: Life and Work by Benjamin Suchoff, 2001.) He later became attracted to Unitarianism and publicly converted in 1916. A committed anti-fascist, Bartók opposed Hungary’s alliance with Germany in World War II and refused to perform in Germany during Nazi rule.

He married Márta Ziegler in 1909 when he was 28 and she was 16. They divorced in 1923 and he married Ditta Pásztory, a piano student, two months later when she was 19 and he was 42. He had two sons, Béla Bartók III and Péter. Bartók and Ditta emigrated to the U.S. in 1940 and accepted a research fellowship at Columbia University, where they compiled a large collection of Serbian and Croatian folk songs for Columbia’s libraries. He died at age 64 in New York from complications of leukemia.

"To violinist Stefi Geyer, he once wrote about his religious belief, calling the trinity a 'clumsy fable' that 'enslaves thought.' ... The existence of the universe did not require the hypothesis of a creator. 'Why don't we simply say: I can't explain the origin of its existence and leave it at that?' "