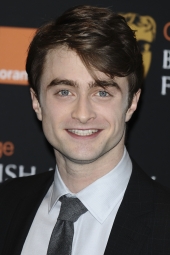 On this date in 1989, actor Daniel Jacob Radcliffe was born to a Protestant father and Jewish mother in London. Radcliffe was selected for the 1999 BBC television production of "David Copperfield" to play the young title character. The film was well-received in Britain, and it helped land Radcliffe a small role in the 2001 Pierce Brosnan movie, "The Tailor of Panama." During filming, there was a massive search in the UK to find someone to play Harry Potter in the film version of the J.K. Rowling creation. Jamie Lee Curtis, on the set of "The Tailor of Panama," sized up Daniel Radcliffe and told his mother, "He could be Harry Potter." Indeed, Radcliffe became immortalized as the star of the eight-movie Harry Potter series.

Radcliffe also acted in "December Boys" (2007), "My Boy Jack" (2007) and had his first theatrical role in the critically acclaimed West End play "Equus" (2007), followed by a role in the 2011 Broadway revival of "How to Succeed in Business Without Really Trying." His first non-Potter movie role was in the 2012 horror film "The Woman in Black" and was followed by other starring roles, the latest as of this writing, in 2019's "Escape From Pretoria." In the 2019 seven-episode series “Miracle Workers” on TBS, he played a low-level angel who answers prayers from a basement office, with Steve Buscemi playing God.

In a January 2012 interview with Parade magazine, Radcliffe said he has a problem with religion or anything else that says, "We have all the answers. ... We change our minds on issues all the time. Religion leaves no room for human complexity." He lives in London with his longtime girlfriend and actor Erin Darke, 34.

“I personally am agnostic leaning toward atheism. I don’t expect there to be a God and an afterlife."