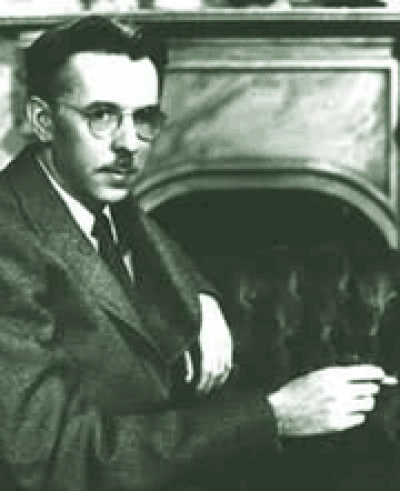 On this date in 1894, humorist and cartoonist James Grover Thurber was born in Columbus, Ohio. He called his mother — who once impersonated a cripple at a faith-healing rally in order to leap up and call herself cured — a "born comedienne." Thurber was partially blinded as a young boy when his brother accidentally shot an arrow into his eye. He could not serve in World War I but attended Ohio State University from 1913-18. He was a code clerk in Washington, D.C., and at the U.S. Embassy in Paris, then became a newspaperman.

He wrote for the Chicago Tribune from Paris and joined the Evening Post staff in New York in 1927, then The New Yorker. He wrote a satire of psychoanalysis, Is Sex Necessary (1929) with E.B. White, featuring his drawings, which immediately became popular. Thurber's eyesight worsened in the 1930s and 1940s. His books included My Life and Hard Times (1933), Fables for Our Time ("Early to rise and early to bed makes a male healthy and wealthy and dead") and two modern fairy tales for children in the 1950s.

His most famous story was "The Secret Life of Walter Mitty," about a meek husband with an absurdly rich inner fantasy life, which spawned a 1947 movie starring Danny Kaye. Thurber once said, "The wit makes fun of other persons; the satirist makes fun of the world; the humorist makes fun of himself, but in so doing, he identifies himself with people — that is, people everywhere, not for the purpose of taking them apart, but simply revealing their true nature."

His biographer Harrison Kinney wrote, "Thurber had never allowed his probing, restless mind to settle on any single theological insurance policy concerning the possibilities of the hereafter. He remained an agnostic." (Cited in Final Chapters: How Famous Authors Died by Jim Bernhard, 2015.)

"If I have any beliefs about immortality, it is that certain dogs I have known will go to heaven, and very, very few persons."

—Attributed to Thurber but unsourced