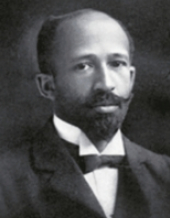 On this date in 1868, W.E.B. Du Bois (William Edward Burghardt) was born in Great Barrington, Mass. He attended all-black Fisk College in Nashville, then earned his B.A. in 1890 and his M.S. in 1891 from Harvard. Du Bois studied at the University of Berlin on a fellowship. Returning from Europe, he completed his graduate studies in history and in 1895 was the first African-American to earn a Ph.D. from Harvard. He taught economics and history at Atlanta University from 1897-1910. The Souls of Black Folk (1903) made his name, in which he urged black Americans to stand up for their educational and economic rights.

Du Bois was a founder of the National Association for the Advancement of Colored People and edited the NAACP's official journal, The Crisis, from 1910-34. He turned The Crisis into the foremost black literary journal. He expanded his interests to global concerns and is called the "father of Pan-Africanism" for organizing international black congresses.

Although he used some religious metaphor and expressions in some of his writing, Du Bois called himself a freethinker (see quote below). In "On Christianity," a posthumously published essay, Du Bois critiqued the black church: "The theology of the average colored church is basing itself far too much upon 'Hell and Damnation' — upon an attempt to scare people into being decent and threatening them with the terrors of death and punishment. We are still trained to believe a good deal that is simply childish in theology. The outward and visible punishment of every wrong deed that men do, the repeated declaration that anything can be gotten by anyone at any time by prayer."

Du Bois married Nina Gomer, with whom he had two children. As a widower he married Shirley Graham. At age 93, he and his wife traveled to Ghana to take up residence and start work on an encyclopedia of the African diaspora. In early 1963 the U.S. refused to renew his passport because of his Communist Party ties, so he made the symbolic gesture of becoming a citizen of Ghana, where he died two years later in Accra.

“My 'morals' were sound, even a bit puritanic, but when a hidebound old deacon inveighed against dancing I rebelled. By the time of graduation I was still a 'believer' in orthodox religion, but had strong questions which were encouraged at Harvard. In Germany I became a freethinker and when I came to teach at an orthodox Methodist Negro school I was soon regarded with suspicion, especially when I refused to lead the students in public prayer. When I became head of a department at Atlanta, the engagement was held up because again I balked at leading in prayer. ... I flatly refused again to join any church or sign any church creed. From my 30th year on I have increasingly regarded the church as an institution which defended such evils as slavery, color caste, exploitation of labor and war. I think the greatest gift of the Soviet Union to modern civilization was the dethronement of the clergy and the refusal to let religion be taught in the public schools.”