There are 1 entries for this date: Tony Kushner 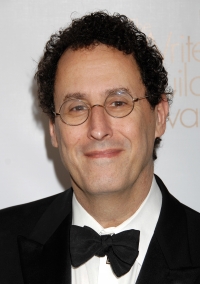 On this date in 1956, Tony Kushner was born in New York City. Kushner grew up in Lake Charles, Louisiana, then attended Columbia University, graduating in 1978. He earned a graduate degree from New York University's Tisch School of the Arts. Kushner wrote the screenplays for Lincoln (2012), Munich (2005), and Angels in America (2004), which he had originally published as a play. Kushner has also written several plays, books and essays, including a children's book adaptation of Brundibar (2003), which was illustrated by Maurice Sendak. Kushner won the Pulitzer Prize for Drama in 1993, the Tony Award for Best Play in 1993 and 1994 and an Emmy in 2004.

He won the 2012 New York Film Critics Circle Award for Best Screenplay and the Paul Selvin Award for "Lincoln." The latter recognizes a script that champions civil liberties. He received a National Medal of Arts from President Barack Obama in 2013. It's the highest honor bestowed to artists and arts patrons by the U.S. government. In 2018 it was announced that he was writing the screenplay for a remake of the film "West Side Story" to be directed by Steven Spielberg and scheduled for release in December 2020. It earned a plethora of awards and nominations in 2022, including Best Performance by an Actress in a Supporting Role for Ariana DeBose (Oscar, BAFTA, SAG),

Kushner describes himself as an agnostic Jew and is very outspoken in his support of liberal politics. He has criticized right-wing theocrats in Israel and has advocated for a secular, constitutional democracy for that country. Kushner had a commitment ceremony with Mark Harris, an editor for Entertainment Weekly, in 2003 and the couple officially married in 2008.