There are 1 entries for this date: Felix Adler 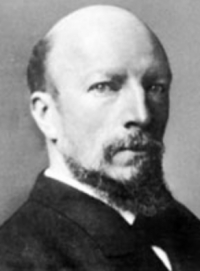 On this date in 1851, Felix Adler, founder of the Society for Ethical Culture, was born in Germany, the son of a Reform rabbi. At 6 he emigrated with his family to New York City. Adler graduated from Columbia College and returned to Germany for advanced study, earning a Ph.D. at the University of Heidelberg. He accepted a position in 1874 at Cornell University as a professor of Hebrew and Oriental literature.

In 1876 he was invited to give a lecture to a group interested in his ideas on a creedless ethical movement, a moral "universal religion" without a deity at its base. The next year the New York Society for Ethical Culture was incorporated and went on to initiate social reforms such as model tenements, the founding of a free kindergarten in 1878, free legal aid to the poor and child labor laws. Adler chaired the National Child Labor Committee from 1904-21.

The International Journal of Ethics, founded by Adler in 1890, is still published by the University of Chicago Press as Ethics. Adler became professor of social and political ethics at Columbia, teaching from 1902 until his death. He also founded Ethical Culture schools, including the Fieldston High School in Riverdale, New York, endowed by John D. Rockefeller. D. 1933.

“For more than three thousand years men have quarreled concerning the formulas of their faith. The earth has been drenched with blood shed in this cause, the face of day darkened with the blackness of the crimes perpetrated in its name. There have been no dirtier wars than religious wars, no bitterer hates than religious hates, no fiendish cruelty like religious cruelty, no baser baseness than religious baseness."