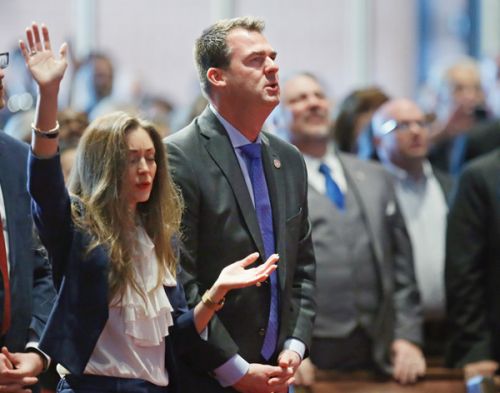 Tell Gov. Stitt that claiming Oklahoma for Jesus is not OK

Please voice your concerns regarding a recent prayer Gov. Kevin Stitt made after winning reelection. Stitt stated in a public prayer that “we just claim Oklahoma for you. Every square inch, we claim it for you in the name of Jesus.”

FFRF has written a letter to Stitt voicing concerns with this prayer. In the letter, Co-Presidents Dan Barker and Anne Laurie Gaylor remind Stitt that the country was founded with a secular Constitution that protects citizens from state-enforced religion. They also call attention to the fact that by claiming Oklahoma for Jesus, Stitt is alienating secular and non-Christian citizens in Oklahoma and reducing them to second-class status.

Tell Stitt that he does not have the right to claim Oklahoma in the name of his personal religion, and to abide by the secular Constitution that he swore an oath to uphold.