Demand Little League remove “I trust in God” from its pledge 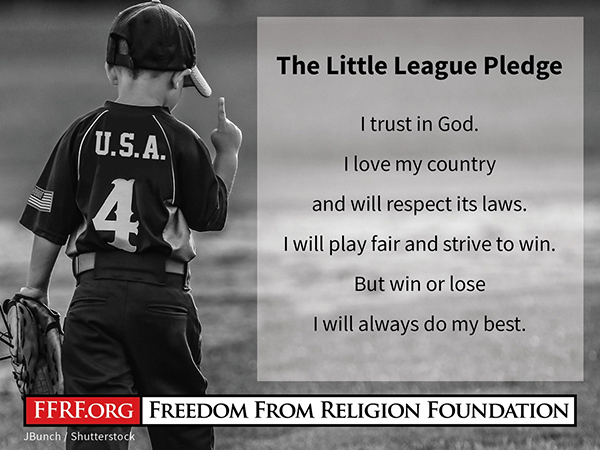 Little League is alienating the large portion of young people who do not have a religious affiliation by requiring players on the field to recite a pledge that states "I trust in God." FFRF has been repeatedly contacted about this unnecessary pledge in the past. Now is the time to urge the president of Little League, Stephen D. Keener, to do something.

The inclusion of this line in the pledge is unrepresentative of the U.S population and completely unnecessary. Since 2007, there has been a 10 percent increase in nonreligious Americans, who are now roughly a quarter of the population.

Organizations like Little League need to stop brainwashing our children into thinking the United States is a theocracy. If you want baseball to be about fun and friendly competition instead of being divisive and coercive towards nonbelievers, contact Little League International and urge it to strike out “I trust in God” from its pledge.

Email Little League through the link provided on its website and urge Stephen Keener to remove this divisive line. Feel free to use or adapt the talking points provided.

As a nonreligious American citizen, I urge you to remove, "I trust in God" from your pledge. The use of such a line is unnecessary and excludes the nonbelieving children and parents who are a part of your organization. Keep baseball the inspiring and entertaining game it is, and leave religion out of it.