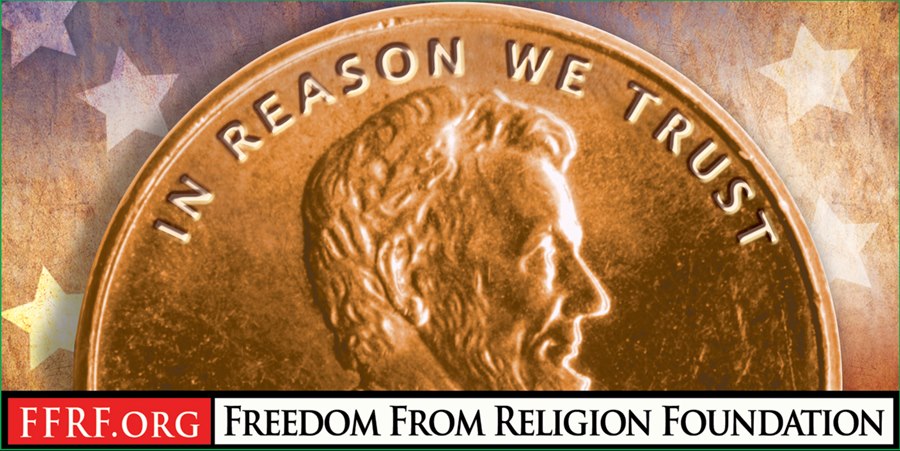 The Chesapeake City Council is considering a proposal tonight to put “In God We Trust” on all its police vehicles, and we need your help now to thwart this proposal.

Such moves are about advancing the Big Lie that the United States was “founded on God” or Christianity, thus dismantling the wall between religion and government. The motto “In God We Trust” is inaccurate, exclusionary, and aimed at brainwashing the country into believing that our nation is a theocracy.

The Chesapeake City Council meeting is at 6:30 p.m. Eastern tonight, July 13, in the City Hall Council chamber at 306 Cedar Road. Please attend the meeting if you live in the area and make your opposition to this absurdity heard loud and clear.

“In God We Trust” was belatedly adopted as a motto when President Eisenhower signed legislation at the behest of the Knights of Columbus and other religious entities, which undertook a national lobbying campaign during the height of 1950s zealotry. The original inclusionary U.S. motto, chosen by a distinguished committee of Jefferson, Franklin and Adams, is the Latin E Pluribus Unum (From Many, [Come] One). As FFRF principal founder Anne Gaylor always pointed out, the religious motto isn't even correct: “To be accurate it would have to read ‘In God Some of Us Trust,’ and wouldn’t that be silly?”

Anne Gaylor’s remark is more apt now than ever. The number of “Nones,” those with no religious affiliation, has tripled since the 1990s, to comprise 23 percent of the U.S. population in 2020. The “Nones” have made substantial inroads in all sectors, a just-released report shows.

Please contact Chesapeake City Council members and urge them to oppose the "In God We Trust" shenanigans. Their emails and phone numbers can be found here.

As an area resident and nonreligious citizen, I am asking you to please oppose the Chesapeake City Council resolution seeking to impose “In God We Trust” on police vehicles. It is an exclusionary motto adopted during the McCarthy era, and it would result in a waste of precious taxpayer dollars. Thank you for standing up for our secular Constitution.