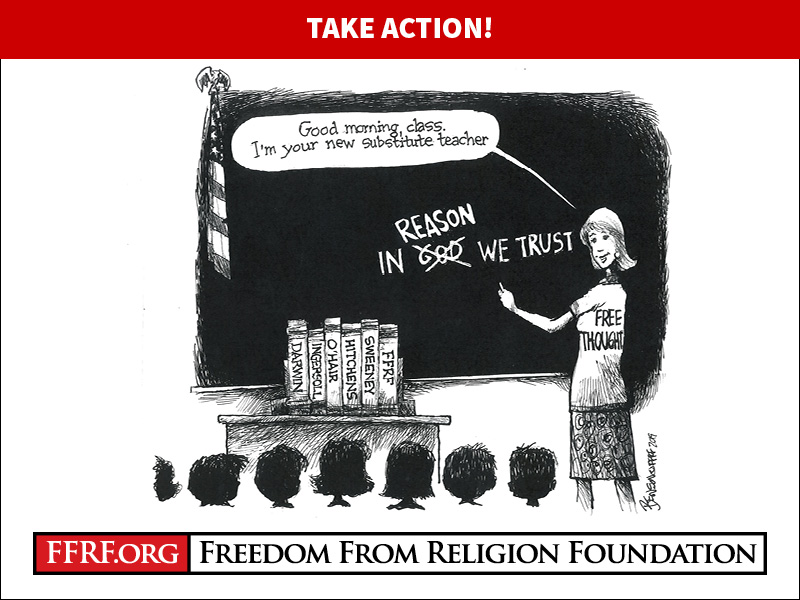 The Oklahoma Legislature is considering a bill that would require all state buildings to install giant “In God We Trust” displays. We need your help to ensure that Oklahoma residents are not subjected to government-sponsored Christian proselytizing.

This bill, H.B. 3817, is part of the nationwide legislative push, Project Blitz. Project Blitz seeks to inject state legislatures with a whole host of religious bills, imposing the theocratic version of a powerful few on We The People. It is an unvarnished attack on American secularism and civil liberties — those things we cherish most about our democracy, and now must tirelessly defend.

While politicians claim that these laws are intended to showcase the national motto or inspire patriotism, it is clear that their true purpose is to peddle religiosity to a captive audience. These laws are about advancing the Big Lie that the United States was “founded on God” or Christianity, dismantling the wall of separation between religion and government.

The original text of this bill excluded public school districts, but that language has since been removed. This opens the door to young, impressionable students being exposed to this discriminatory, inaccurate and exclusionary phrase aimed at brainwashing American schoolchildren into believing that our nation is a theocracy.

Most shockingly, the bill specifies that the “placement of the display shall be in keeping with the placement and size of the display of the national motto in the United State Capitol Visitor Center,” which is a colossal 4 feet by 70 feet.