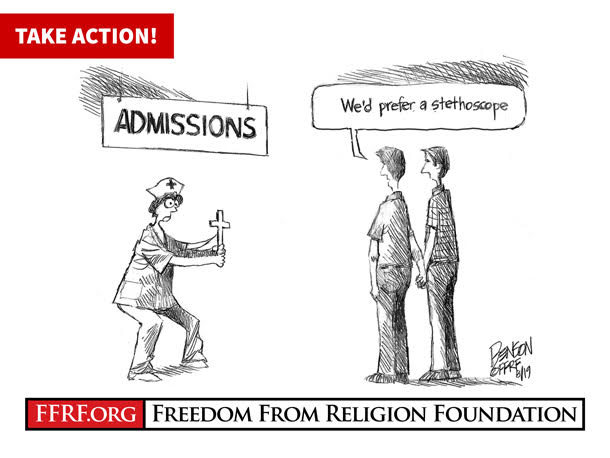 In June, the Department of Health and Human Services proposed sweeping rollbacks on non-discrimination regulations under the Affordable Care Act, including those protecting abortion care and LGBTQ patients.

This rule would amend Section 1557 of the Affordable Care Act, which prohibits discrimination based on race, color, national origin, sex, age and disability. It is the first civil rights law to prohibit discrimination in health care based on sex. If finalized, the proposed changes, among other things, would:

Dozens of major public health organizations, including the American Medical Association, have denounced these rule changes and advised that the health and well-being of patients would unequivocally be jeopardized by this regressive proposal.

The public comment period on these HHS rules is open until Tuesday, Aug. 13. Please join FFRF in opposing dangerous religious exemptions for health care professionals and the elimination of civil rights protections for LGBTQ people. Click on the red “Take Action!” link below. You will be taken to the regulations.gov comment page. Click on the blue button in the upper right corner that reads “Comment Now!” and fill out the prompt provided. It just takes a minute or two for your voice to be heard.

TALKING POINTS
Please feel free to use or adapt the talking points provided. Unfortunately, this cannot be automated since it is an official government page.

I strongly oppose the proposed changes to Section 1557 of the Affordable Care Act, a section that ensures civil rights protections for vulnerable populations in the health care system. I am particularly concerned about the sweeping religious exemptions for medical professionals, allowing for discrimination based on personal religious beliefs that would endanger abortion and LGBTQ patient care. The proposed rule changes will exacerbate existing inequalities by emboldening health care providers to deny care based on their religious beliefs. This is unacceptable.