Like coaches, teachers may not conduct prayer or lead any religious exercise during class or when acting in their official capacity as a teacher. For instance, a teacher who is monitoring the cafeteria during lunch cannot attempt to lead students in prayer or proselytize students just because it is not technically during a class; the teacher is still acting in an official capacity as a public school employee.

You have the right to secular school events
Students have the right to attend and participate in school events, including graduation, without being forced to observe or participate in school-sponsored prayer or any other religious exercise. Schools cannot include prayer as an official part of a graduation ceremony or any other school-sponsored event, such as athletic games, award banquets, and assemblies. This means, for example, that a school cannot arrange for a student to lead a prayer over the loudspeaker before a football game.

You have the right to be free from religious coercion
Coercion occurs when an authority figure pressures a student to participate in something. No public school employee, including teachers and coaches, may coerce or attempt to coerce students into believing in a religion, participating in prayer or performing any other religious activity. Coercion can be both direct and indirect, and it can look different depending on the situation. Direct coercion could include a teacher telling students they must attend a religious event as part of their grade or a coach telling players to gather for a mandatory team huddle that includes prayer.

However, coercion can involve more than directly forcing students to pray. Teachers and coaches are authority figures with immense power over the lives of their students, such as their grades, playing time and college prospects. Therefore, “suggestions” by coaches or teachers are often taken as commands. Students inevitably feel subtle pressure to participate in religious exercises promoted by these authority figures, whether or not they are explicitly “required” to do so. This is indirect coercion.

The First Amendment’s Establishment Clause and Free Exercise Clause dually guarantee that students have the right to be free from public school employees coercing them, directly or indirectly, into participating in any type of religious activity.

You have the right to complain about violations
The Freedom From Religion Foundation receives and acts upon thousands of violations of the constitutional separation between state and church each year. More than half of these are violations of the rights of students in our nation's public schools. You can report a violation to us by clicking here. 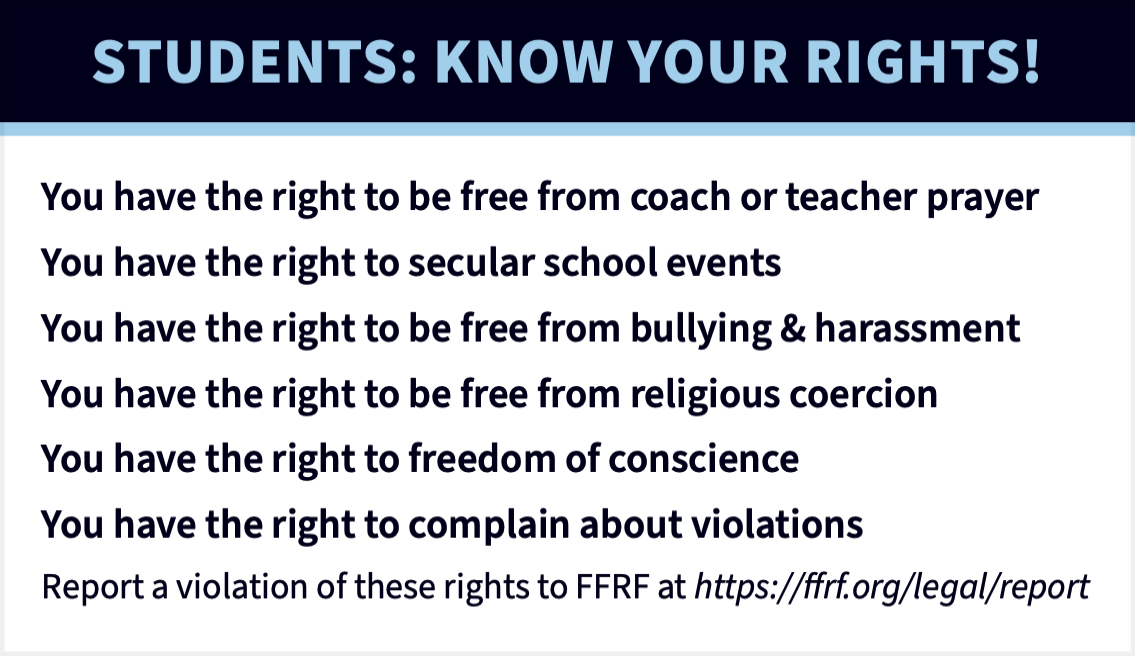 The Freedom From Religion Foundation is a 501(c)(3) educational nonprofit with more than 37,000 members nationwide and regional chapters across the country. FFRF's purposes are to defend the constitutional principle of separation between state and church and to educate the public on matters relating to nontheism.