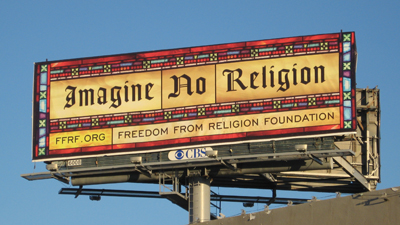 This originally appeared in the Colorado Independent on Dec. 3, 2008, and is reprinted with the kind permission of the author, a Foundation member. 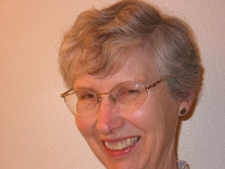 The Freedom From Religion Foundation, a national freethought group of atheists, agnostics and skeptics, has erected a billboard in Colorado Springs that delivers the simple, thought-provoking message, “Imagine No Religion.”

Just think of it! The absence of religious differences in beliefs would mean an immediate end to many wars, including the conflict between Israeli Jews and Palestinians; Muslims fighting Christians in Africa and Indonesia; Muslims and Hindus sparring in Bangladesh; battles in Sri Lanka. There would no longer be a basis for hostilities between Shiites and Sunnis in Iraq, and they could work together to create a better country, affecting the entire Middle East.

If everyone in the world suddenly decided to no longer believe in an unproven, unseen being, there would be no call for suicide bombers, ending the so-called “War on Terror.”

Of course some wars are fought to acquire necessary resources. But whether the goal is obtaining oil or gaining territory for Lebensraum, it is caused by the needs of a populace that has exceeded its native resources. World population, now more than 6.7 billion, is heading toward 8 billion by 2025, requiring yet more space, more food and more resources. (In 2000, 1.1 billion people did not have reasonable access to safe drinking water, leading to 1.7 million deaths.)

If religious opposition to birth control suddenly ceased, our government could address this growth, resuming its commitment to providing adequate family planning to the 201 million women worldwide who lack it now. That would avert 52 million pregnancies a year. Poverty would be reduced, as well as environmental degradation and resource depletion. The contribution to reducing global warming would be enormous.

Modern contraceptive use could also prevent, annually, 215,000 pregnancy-related deaths and 685,000 cases of children losing their mothers from those deaths.

Here at home, without religious groups pressuring our lawmakers, our government could affirm a woman’s right to avoid unintended pregnancy by increasing funding for Title X family-planning programs and repealing the restrictions on public funding for abortion. It could mandate comprehensive sex education, saving the $170 million it now pays each year for abstinence-only sex education, which puts so many of our children at risk for unplanned pregnancies as well as sexually transmitted diseases. Without religion, pharmacists would have no reason to refuse to fill prescriptions for contraceptives.

And think what medical marvels the 21st century might see if radical extremists stopped opposing embryonic stem cell research! Their devotion to a 5-day-old clump of cells has contributed to an untold number of deaths of living, suffering persons. It was religionists that delayed research into cures for the new disease of HIV/AIDS in the 1980s, because they believed it was God’s punishment for what they considered sexual deviancy. Even today religious opposition to condoms and the diversion of funds for teaching “abstinence” impede efforts to control one of the most destructive health crises of modern times. Today some 38 million people are living with AIDS, and over 20 million have died.

Such judgmental condemnation of homosexuality, prevalent throughout Roman Catholic and evangelical religions in our country, causes untold emotional distress as well. Without religion, this psychological persecution would end and would make the debate about gay marriage a non-issue.

Religion has a sad history of sexual molestations of youngsters by members of the clergy, especially Catholic priests. This, thankfully, would cease. As would the fear of everlasting punishment in the afterlife, one of religion’s most potent weapons to maintain control over the lives of its congregations. This doctrine qualifies as child abuse when it terrifies children. Computer websites, which children can easily access, quote bible passages to vividly describe, in graphic detail, the eternal torments awaiting transgressors in Hell. Without the protection that society now automatically affords religion, we could classify such sites as obscene, as well as the book that preaches a god engaged in such sadistic torture. With religion gone, both Hell and the Devil would disappear. Good riddance!

A world without religion could concentrate on the greater good for humanity, employing science and logic rather than dogma. The time, energy and resources now expended on religion could be devoted to preserving our fragile environment for future generations and ensuring that every individual has the means to experience the fullness of the life we’re given.

Janet Brazill is a retired computer systems analyst, now engaged in social and political activism. She lives in Colorado Springs.