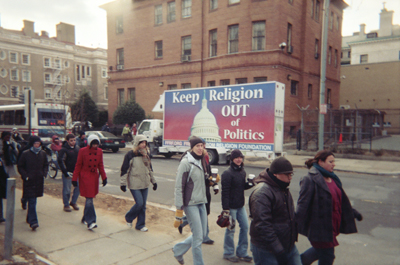 The Freedom From Religion Foundation, its co-presidents Dan Barker and Annie Laurie Gaylor and several of its members are among the 34 co-plaintiffs in an exciting federal lawsuit, Newdow v. Roberts, seeking to enjoin the Presidential Inaugural Committee from sponsoring prayers at the official Inauguration. The challenge was filed on Dec. 30 by attorney Michael Newdow in the U.S. District Court for the District of Columbia.

The newsmaking lawsuit also sought to enjoin the Hon. John Roberts, Jr., Chief Justice of the U.S. Supreme Court, from adding the religious phrase, “So help me God,” to the Presidential oath of office.

The 34-page legal complaint (see excerpt, Page 7) punctures myths, and documents that for most of our country’s history, there were no clergy-led prayers at inaugurations.

District Judge Reggie B. Walton refused to issue a restraining order against Roberts or the inaugural committee at a hearing on Jan. 15, but did not dismiss the federal lawsuit.

The plaintiffs include a diverse body of U.S. nonbelievers and groups, and their unnamed children, all of whom “have a right to observe their government in action,” and all of whom watched the inaugural event, some in person, others at home on television.

“Interlarding those ceremonies with clergy who espouse sectarian religious dogma does not unite, but rather divides, our citizenry,” alleges Newdow in his legal complaint. “Similarly, instead of instilling confidence in our governmental structure, it tears at the very foundation upon which that structure is built.”

“Atheists are the most despised minority in the land,” the complaint contends. Government-sponsored prayer, and government support of monotheism, “stigmatizes them (atheists) and perpetuates, if not instigates, this situation.”

Of the nation’s 57 public presidential inaugurations, Newdow points out, 39 were “devoid of clergy-led prayers,” and “only 18, spanning the last 72 years, have included them.” All of the latter prayers were Christian-based.

The notion that “so help me God” was added to the presidential oath by George Washington is “a myth.” Not until 1881, can the first use of “so help me God” as an addition to the presidential oath be traced. The phrase was “apparently used only intermittently until 1933.” That unauthorized alteration has been interposed by the Chief Justice since then.

The lawsuit did not seek to restrain Barack Obama from adding the words, but Newdow argues that “there is no authority to alter the text of the Constitution” by the Chief Justice, which action is “an offensive, stigmatizing and [creates] concrete injury” to nonbelievers.

Newdow analyzes legal precedent to show that “ ‘The government may not . . . lend its power to one or the other side in controversies over religious authority or dogma.’ By placing ‘so help me God’ in its oaths and sponsoring prayers to God, government is lending its power to one side of perhaps the greatest religious controversy: God’s existence or nonexistence.”

The Complaint notes the harm of religious ritual creeping into government, exemplified by the fact that a member of the Supreme Court itself (Justice Scalia), joined by two of his colleagues, has averred that “the Establishment clause. . . . permits the disregard of devout atheists.”

The plaintiffs do not consider the references to religion to be an unconstitutional “benignity,” but as analogous to the “separate but equal” laws of our nation’s earlier history, showing that atheists are “so inferior and so degraded” that their views on religion warrant no respect. When the words “under God” were interlarded with the Pledge of Allegiance in 1954, for instance, Congress specifically noted that it was acting “to deny . . . atheistic . . . concepts.”

“Perhaps most importantly, . . . the Holy Bible, which will be used during the inaugural ceremonies . . . calls anyone who is an atheist a ‘fool,’ while further making the outlandish, degrading and insulting declarations that atheists ‘are corrupt, . . . have done abominable works, [and] there is none that doeth good.’ ” “It doesn’t end there. That book decrees that Plaintiffs ‘shall surely be put to death.’ ” (Lev. 24:16)

The plaintiffs seek to declare that the unauthorized addition of “so help me God” to the constitutionally prescribed presidential oath of office by the chief justice violates the Establishment and Free Exercise Clauses of the First Amendment, and the Religious Freedom Restoration Act.

Likewise, the use of clergy, and openly Christian clergy, at the presidential inauguration, violates the First Amendment and Religious Freedom Restoration Act.