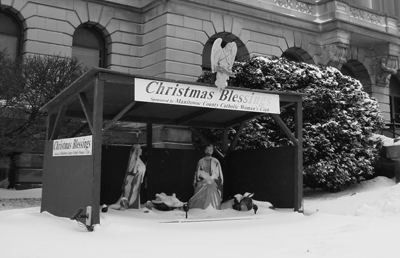 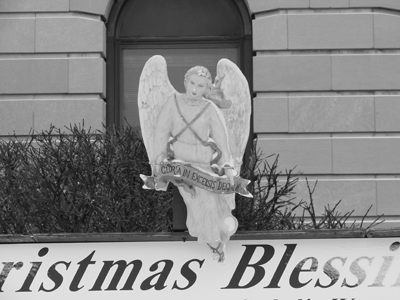 The Freedom From Religion Foundation took the County of Manitowoc, Wis., to court over its “provocative and divisive” prominent display every December since 1946 of a nativity scene bearing the words “Glory to God in the Highest” on its courthouse lawn.

The Foundation filed suit representing two Manitowoc County members, who were not named in the legal complaint to avoid identifying them locally during the Christmas season, when hostility runs high. (See plaintiff Paul Rappel’s letter on page 8 to his local newspaper about why he decided to become a plaintiff and go public.)

“When the County displays a Nativity scene on the Courthouse grounds, close to the entrance and in a prominent position, it places the imprimatur of the County government behind the Christian religious doctrine, to the exclusion of citizens who are not Christian, such as Jews, Native American practitioners, Muslims, animists, etc., as well as the significant and growing portion of the United States population that is not religious at all,” notes the Foundation legal complaint, filed in federal court on Dec. 17 by attorney Richard Bolton, in the eastern district of Wisconsin.

The Foundation wrote a letter a year ago warning the county that its display was in violation of the Supreme Court’s two decisions governing nativity scenes on public property. The high court has decisively ruled that crèches may not be on government property as the sole focus of a holiday display, and should not be by core government buildings at all.

The display this year was erected during the last week of November and, according to defendant Ziegelbauer, stayed up until Jan. 10, 2009.

“The defendants have given perpetual approval to the Manitowoc County Catholic Women’s Club and the Knights of Columbus to display the Nativity scene, despite known public opposition,” notes the complaint.

Ziegelbauer asserted to the media that the courthouse nativity scene “was a good idea 10 or 20 years ago, and it still is.” He has been quoted saying those who oppose the display are political outsiders who will “go away” after January.

The Foundation and various regional media were unable to uncover any permit for the display, or approval by the Manitowoc Public Works Committee, or even written guidelines about public displays.

“As a result of the defendants’ phantom regulations governing displays on the Courthouse lawn, preference is given for the displays of political insiders,” continues the complaint. “By contrast, the County’s unspecified and undocumented prior restraint of other displays is subject to discriminatory effect, as reflected by the comments of Norbert Vogt, a Manitowoc County Board Supervisor on the Public Works Committee, who has publicly stated that the County should not allow atheists to put up a sign declaring ‘There is no God.’”

“According to Supervisor Vogt, ‘everybody’ realizes that there is a Supreme Being and therefore it would be unacceptable for the County to allow a sign denying that reality.”

The visibility of the display at a prominent public site provides “a powerful medium of support for the Christian message thereby conveyed,” notes the Foundation complaint.

The Foundation asks for an order enjoining the County from permitting the display on public property.