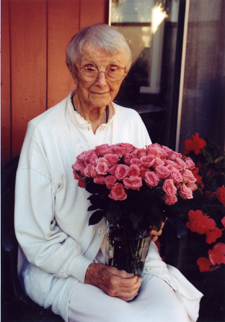 Longtime Foundation member Clara A. Carlson, 102, died in her home on January 10. Clara had been in good health, but was weakened by a bout of pneumonia last fall.

She was born in Oakland, married Ralph E. Carlson (who died at the age of 101 in 2004), and moved with him and their children to Port Angeles, Wash., in 1971. Clara wrote many letters to the editor, monitored local state/church issues, was an ardent feminist, freethinker, supporter of abortion rights and peace activist. She first joined the Foundation in 1980.

Anne Gaylor, Foundation president emerita, marveled at the memory of Clara, well into her 90s, traveling by herself cross-country to attend a Foundation convention. Clara maintained FFRF friends and pen-pals.

She requested no memorial service.

Clara corresponded, in her beautiful handwriting, with the Foundation right up until her death. In one of her last letters to the Foundation, dated Dec. 6, 2008,

“The furor over the ‘atheist sign’ in the Washington State House Capitol is most amusing. The indignant Christians stole it away, but it was found and brought back.

It has become foremost news at every broadcast.

“What delights me is that FFRF is getting wonderful publicity and people who have never heard of us before are now quite aware of our existence.

“Gov. Gregoire is a Catholic, but she is fair, and says if there is a Christmas and a Jewish sign, there must be an allowance for nonbelievers. You can’t beat that! Yours for a happy solstice, Clara.”

Last year, at the age of 101, Clara drew a lovely design that is on one of the Foundation’s winter solstice greeting cards.

The Foundation will run an additional tribute to Clara in the March issue.