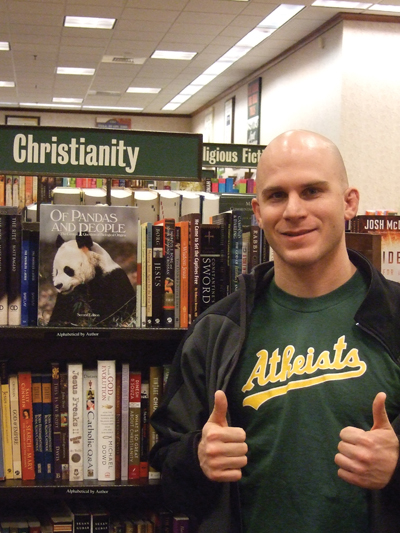 Activist Jason Gregory, wearing “my favorite shirt,” standing next to the notorious creationist book, now properly located in the Christianity section at Barnes and Noble, thanks to his complaint.

I’m a proud member of FFRF. Several weeks ago I wrote a letter to Barnes and Noble, both my local and headquarters, asking them to remove Of Pandas and People from the science section of the store.

In addition to being disgusted at the sight of that book in the already small section labeled “Science,” I’m concerned at the miseducation of others who may go to that section seeking to learn more about the wonderful topic of science, but end up with a theological text that describes nothing in the natural world as far as testable hypothesis.

I received a letter back from the Vice President of Trade Book Buying at B&N, Antoinette Ercolano. The letter stated, “We have the book classified in our History of Science section as it represents an example of a type of textbook produced during a specific time period.” (As if all books aren’t produced during a specific time period.) “As this classification is also consistent with the book industry classification of the title, we will not be changing it in our stores.”

This letter was not satisfactory for me so I called back the headquarters and spoke with someone who took down my information and said that someone would call me back. I said Darwin’s 200th birthday should not be desecrated by a religious textbook filed right next to the Origin of Species in the Science section. I also left another message for Ms. Ercolano.

Ms. Ercolano then called and left a message for me, saying that B&N has reconsidered its position and has decided to place Of Pandas and People in the religion section!

This letter will confirm that no invocation was given at the academic banquet on March 2, 2009. Please direct any further questions to the District's attorney: Celynda L. Brasher, 24 North Meramec, Suite 600, St. Louis, Missouri, 63105.

Two students e-mailed the Foundation to complain, at the last minute, that a March 2 awards recognition dinner by the Fulton Public Schools in Missouri was scheduled to open with a prayer. FFRF attorney Rebecca Kratz went into high gear, and faxed a strong letter of complaint the morning of the event: "It is unlawful for any school-sponsored event, such as a banquet recognizing academic achievement, to open with prayer. FFRF asks that you immediately take action to ensure that tonight's banquet does not open with prayer." The students reported on March 3 that the prayer that traditionally opened the event was absent! The District reply is above.