Scroll Down For Current News and Action

STOP THE WAR AGAINST REPRODUCTIVE CHOICE

Do you think Catholic Bishops should have veto power over women's contraceptive health insurance coverage? They think so! U.S. Roman Catholic Bishops are waging war against Health and Human Service's mandate, starting in August to ensure U.S. women workers have contraceptive coverage. In a colossal power play, the Bishops seek to impose their narrow religious doctrine on many of America's employees, whether or not they subscribe to the Catholic faith.

The U.S. Catholic Conference of Bishops has pledged a multimillion-dollar attack against the contraceptive mandate leading up to July 4, 2012. Over 40 Roman Catholic dioceses and institutions are suing to stop Health and Human Services’ contraceptive mandate. Every Sunday from the pulpit Catholics who shun their own church’s teachings against contraception are being told to help the Bishops use the force of secular law to deny birth control to non-Catholics.

The louder the Church cries “assault against religious freedom,” the harder it works to take away reproductive freedom. While the Bishops preposterously portray themselves as victims of an “attack on religious liberty,” in fact it is they who are the threat to religious liberty. They seek to impose their irrational belief that contraception is “sinful” on everyone else.

The HHS contraceptive mandate does not apply to any church or denominations, including Roman Catholicism. The HHS mandate even exempts non-church religious (or quasi-religious) employers, such as religious hospitals or schools, from providing contraceptive health care for female workers. Instead, HHS is requiring private insurance companies to pick up the costs for providing such contraceptive health care. This policy protects the rights of women employees, and the so-called freedom of conscience of religious institutions. A Methodist woman employed at a Catholic school will be able to use her insurance policy to renew her prescription for birth control pills, for instance, at no cost to the school. This is why the Catholic Bishops are fuming?!

The Bishops have introduced into Congress the so-called “Respect for Rights of Conscience Act,” which goes even further.  They are lobbying Congress to pass a bill that would allow any private employer with a “religious or moral objection” to have veto power over health care coverage. For example, a Jehovah’s Witnesses employer could bar coverage of an emergency blood transfusion for employees. A Southern Baptist or Mormon employer could deny prescription birth control to unmarried female employees.

The Freedom From Religion Foundation is storming the “Bishops’ Bastille” in an unprecedented TV ad campaign to counter the Roman Catholic Church’s inquisition against contraceptive insurance coverage. The 30-second spots feature one of America’s favorite former Catholics — actress Julia Sweeney, beloved by freethinkers for her play, “Letting Go of God,” and by the American public for her portrayal of “Androgynous Pat” on Saturday Night Live! Read more.

The Freedom From Religion Foundation is fighting back against an offensive by the U.S. Conference of Catholic Bishops and its upcoming “fortnight for freedom.” Like a secular David defending himself against Goliath, FFRF has launched an opening volley against the monolithic church and its war against the contraceptive mandate. Read more.

Although Times Square is home to many provocative images, the Freedom From Religion Foundation is upping the ante with its patriotic red-white-and-blue billboard placed this week on Times Square saying: “Quit the Church. Put Women’s Rights Over Bishops Wrongs.”  Read more.

The Freedom From Religion Foundation has placed a bold 14x48-foot billboard in patriotic colors at I-70 and North Broadway in St. Louis, Mo., aimed at Roman Catholics, which urges them to “Put women’s rights over Bishops’ wrongs” and “Quit the Church.” Nearly 300,000 people will drive by the board every week during its four-week run. Read more.

Julia Sweeney, one of America’s most famous former Catholics as actress and playwright of “Letting Go of God,” stars in a new TV and radio ad just produced by the Freedom From Religion Foundation.

The commercial counters the anti-contraceptive campaign by Roman Catholic Bishops. The wealthy U.S. Catholic Church has pledged to spend multimillions in a PR blitz leading up to July 4th to overturn the Obama Administration’s contraceptive health insurance mandate. Read more. 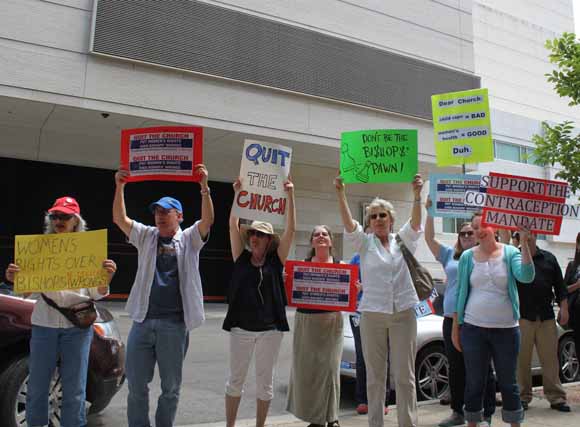 Did you know “contraception kills”?

That’s what an intrepid coterie of FFRF’ers was told by true believers when we counterpicketed a June 8 rally conducted by the Roman Catholic Church at the federal courthouse here in Madison, Wis.

I held a sign, “Quit the Church,” accompanied by about 20 other FFRF members, staffers, interns and volunteers. It was chilling to hear a young male speaker intone, “God is on our side.” At one surreal point during the rally, which featured at least six prayers, a priest instructed all of the present faithful to turn away from the podium and face us counter-protesters. As they prayed aggressively at us we had fun chanting my mother’s mantra: “Nothing Fails Like Prayer.” Read more.

The Freedom From Religion Foundation’s signature full-page ad, “It’s Time to Quit the Catholic Church,” is in today’s USA Today (Money Section), which stays on the newsstands all weekend. The ad by FFRF, a state/church watchdog and the nation’s largest atheist/agnostic association with over 18,000 members, urges liberal and nominal Roman Catholics to “quit” their church over its war against contraception. Read more.

The Freedom From Religion Foundation’s full-page ad, “It’s Time to Quit the Catholic Church,” runs in today’s Washington Post (A-5 Main), urging liberal and nominal Roman Catholics to “quit” their church over its war against contraception. Read more.

The Freedom From Religion Foundation’s full-page ad, “It’s Time to Quit the Catholic Church,” runs in today’s Washington Post (A-5 Main), urging liberal and nominal Roman Catholics to “quit” their church over its war against contraception. Read more.

The Freedom From Religion Foundation placed an open letter via a full-page ad in today’s New York Times (page 10, front section) urging liberal and nominal Roman Catholics to “quit” their church over its war against contraception. Read more. 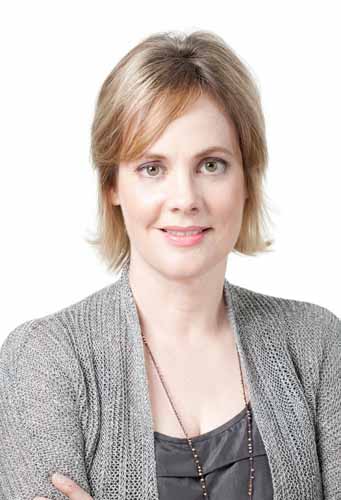 Dear 'Liberal' Catholic: It’s time to quit the Roman Catholic Church. It's your moment of truth. Will it be reproductive freedom, or back to the Dark Ages? Do you choose women and their rights, or Bishops and their wrongs? Whose side are you on, anyway?

Who will President Obama side with? Women or Catholic bishops? The bishops are trying to boss Obama around, and it's time he showed them that the United States already has a secular "boss" — a Constitution that precludes theocratic interference with our government and its citizens. Read more.

Donations to the Freedom From Religion Foundation are gratefully received and may be designated for a specific purpose or for general support. All gifts and dues given to the Foundation are deductible for income tax purposes.

Other Ways to Give

Give a gift membership

Enlighten those on your gift list! Gift membership recipients will receive 10 issues of Freethought Today.

Give a Gift Membership

"Those who expect to reap the blessings of freedom, must undergo the fatigue… of supporting it." —Thomas Paine

For a free sample issue of Freethought Today, as well as further information about the Foundation, fill out this form and you will receive a complimentary info packet soon.