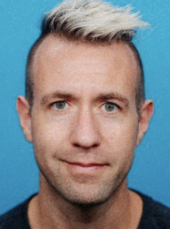 On this date in 1983, musician and visual artist Jonathan Steingard, the eldest of three children, was born in Canada to religious parents. His father was pastor of what Steingard calls a charismatic, Holy Spirit-focused church. He started playing guitar at age 9.

In 2004 he joined Hawk Nelson, a Christian pop-punk band that had formed in 2000 in Peterborough, Ontario. In 2012 he took over as lead vocalist and frontman when Jason Dunn left the band. In 2013 Beliefnet called the band "officially one of Christian rock’s elder statesmen." The band has recorded eight studio albums (most recently "Miracles" in 2018) and is a staple at Christian music festivals.

It was in the parking lot at one of those festivals — Spirit West Coast in Del Mar, Calif. — that he proposed to Jessica Hubbard. They married in 2007 and have a son, Grey (b. 2017), and a daughter, Winter Joy (b. 2018). Both pregnancies were complicated by placental abruptions in which the placenta separates from the inner wall of the uterus before birth.

Asked by Risen Magazine in 2014 to describe his spiritual journey, Steingard said as he got older, he felt something was missing and he ended up at a Baptist church "really diving into Scripture." The journey took an unforeseen and surprising turn in April 2020 when he announced on Instagram that he no longer believed in God: "It didn't happen overnight or all of a sudden. It's been more like pulling on the threads of a sweater, and one day discovering that there was no more sweater left."

In a Christian Post story (May 23, 2020), he said he sees the bible as "human, flawed and imperfect," adding, “I am stunned by the number of people in visible positions within Christian circles that feel the same way as I do. Like me, they fear losing everything if they’re open about it.” His doubt was increasingly fueled by questions such as these common ones: "If God is all loving, and all powerful, why is there evil in the world? Can he not do anything about it? Does he choose not to?"

Steingard had worked on various musical and video side projects while part of the band. He and Jessica, who live in San Diego, started Breaktide Artist Services, now Steingard Creative. "I specialize in music videos, promo videos, text animation and effects. Really anything that needs to grab people's attention," he said.

"After growing up in a Christian home, being a pastor's kid, playing and singing in a Christian band, and having the word 'Christian' in front of most of the things in my life, I am now finding that I no longer believe in God."