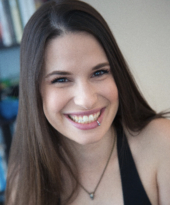 On this date in 1983, journalist and science communicator Cara Louise Santa Maria was born in Plano, Texas. Her parents were raised Catholic but converted to Mormonism as adults. Santa Maria was baptized as a Latter-day Saint at age 8 but by age 15 had left the church and started identifying as an atheist.

She earned a B.S. in psychology from the University of North Texas in Denton in 2004, followed by an M.S. in neurobiology in 2007 and of this writing was working toward a Ph.D. in clinical psychology from Fielding Graduate University in Santa Barbara, Calif.

Santa Maria was laboratory manager and chief cell culture technician at the Center for Network Neuroscience at UNT. She also taught biology and psychology courses at the high school and undergraduate level. In 2009 she moved to the Los Angeles area to begin a career in science communication. She was senior science correspondent for the Huffington Post and later a correspondent on “Bill Nye Saves the World.”

Santa Maria co-produced and hosted a pilot titled "Talk Nerdy to Me" for HBO but it never aired. "Talk Nerdy" is the title of her weekly science podcast, which celebrated its sixth anniversary in March 2020. Atheism and politics are sometimes featured topics. She has been a science correspondent and guest on National Geographic's TV series "Brain Games." Since 2015 she has co-hosted "The Skeptics' Guide to the Universe" podcast and co-wrote the 2018 book with that title.

On Earth Day 2017, she was an emcee at the March for Science in Washington, D.C. "Science is under attack," she told the crowd. "The very idea of evidence and logic and reason is being threatened by individuals and interests with the power to do real harm.”

From 2009 to 2011, she was in a relationship with television host and political commentator Bill Maher but has never married. Neil deGrasse Tyson presented her with a 2014 Knight Foundation award for her efforts to make science clearer for a broad public audience.

She was the recipient in 2017 of FFRF's Freethought Heroine award. She told convention attendees she remembers the day when she was 14 that her father told her “I have a moral obligation to God to force you to go to church until you’re 18 so long as you live under my roof.” Santa Maria replied, “Then maybe I won’t live under your roof anymore.” Her acceptance speech is here.