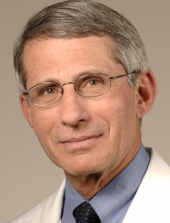 On this date in 1940, physician and immunologist Anthony Stephen Fauci was born in Brooklyn, N.Y., to Eugenia (Abys) and Stephen Fauci, owners of a family pharmacy. His pharmacist father was known as "Doc" in the neighborhood. Fauci attended a Catholic high school run by the Jesuits and graduated with a B.A. in classics in 1962 from the College of the Holy Cross, a Jesuit school in Worcester, Mass.

He graduated first in his class at Cornell University Medical College in 1966 and completed a residency in internal medicine. He then joined the National Institutes of Health (NIH) as a clinical associate at the National Institute of Allergy and Infectious Diseases (NIAID). He became NIAID director in 1984, a position he still held in 2020.

He turned down several offers to lead the NIH and has been at the forefront of U.S. efforts to contend with viral diseases such as HIV, SARS, the 2009 swine flu pandemic, MERS, Ebola and COVID-19. As a member of the White House Coronavirus Task Force in 2020, he became a public health spokesperson for the office of the president during the pandemic.

Due to periodic mild but public disagreements with President Trump, Fauci was criticized by right-wing pundits and received death threats resulting in the need for a security detail. He also was demonized by some on the left known as "coronavirus truthers" and "anti-vaxxers" who think the pandemic is a hoax and favor so-called herd immunity over vaccination. He has received 30 honorary doctorates for his scientific accomplishments and between 1981-94 was the fifth most-cited scientist out of over 1 million worldwide who published articles in scientific journals.

He married Christine Grady, 11 years his junior, a nurse and bioethicist with the NIH, in 1985. As of this writing, she was chief of the Department of Bioethics at the NIH Clinical Center. They have three daughters, Jennifer, Megan and Alison.

Asked in 2003 by TheScientist magazine if he was a man of faith, given that he was raised Catholic and attended Jesuit schools, Fauci replied: "Broadly and generically, I'm not a regular church attender. I have evolved into less a Roman Catholic religion person [to] someone who tries to keep a degree of spirituality about them."

Brian Lamb read the above statement to Fauci in a later interview (C-SPAN, Jan. 8, 2015) and asked him if that was still true. "Totally accurate today," Fauci said. He also told Lamb that "there are a lot of things about organized religion that are unfortunate, and I tend to like to stay away from that. ... [T]he idea about the organization of religion is not something that I adhere to very much."

"I look upon myself as a humanist. I have faith in the goodness of mankind."