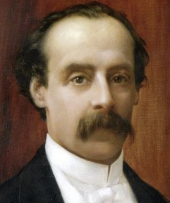 On this date in 1840, José Manuel Emiliano Balmaceda Fernández, 11th president of the Republic of Chile, was born to wealthy parents in Bucalemu, the eldest of 12 children. He attended the School of the French Friars and considered joining the clergy during studies at the Santiago Seminary. In 1864 he became secretary to President Manuel Francisco Montt. He married Emilia de Toro Herrera in 1865. They had eight children, six of whom survived to adulthood.

In 1868 he co-founded the newspaper La Libertad, contributed to Revista de Santiago and published two monographs: "The political solution in electoral freedom" and "Church and State." In 1869 he joined the Club de la Reforma, which became the political basis of the Liberal Party and whose members generally held anti-clerical views.

He was elected to the Chilean congress in the 1870s and in 1882, as minister of the interior during the presidency of Domingo Santa María, Balmaceda used his powers to enforce new civil marriage and divorce laws and other measures opposed by the Catholic Church. He served as president from 1886-91. Conservatives opposed many of Balmaceda's policies and a constitutional crisis ensued over his ability to appoint Cabinet members of his choosing. Congress refused to fund the government. Civil war broke out after he illegally decreed that the 1890 budget would carry over into the next year.

By now he had lost any support he may have had from landowners and clergy. After his forces were defeated at the Battle of La Placilla and the rebel army approached Santiago, he took refuge in the Argentine legation, where he shot and killed himself at age 51 on Sept. 19, 1891. It was one day after the anniversary of his elevation to the presidency and the day when the term for which he had been elected president ended.

"Clerical influence also turned against him as a result of his radically secular ideas about government."